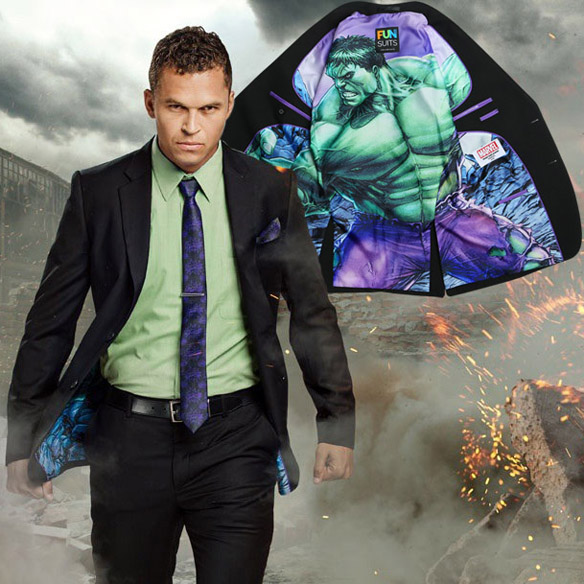 You might not like Bruce Banner when he’s angry but everyone likes him when he’s stylin’ and now The Incredible Hulk Secret Identity Suit lets you rock the same gamma-powered fashion sense.

If there was ever a suit that embodied everyone’s favorite giant green Avenger, it’s this one. Just like Banner, it’s subtle, cleverly hiding its true nature. Sure, a close look will reveal cool details like a print necktie and pocket square with a comic book SMASH on them, along with embroidered Hulk insignia logos on the sleeves and themed etched buttons, but the suit’s true nature is only revealed when you get to see the lining of the jacket. Pow! Forget Hulk smash. This Hulk is smashing… in a fashion sense, of course.

The Incredible Hulk Secret Identity Suit will be available November 2016 but it can be pre-ordered now for $249.99 at fun.com.

Capture the rage of Bruce Banner on the Incredible Hulk Transformation Phases T-Shirt. Bruce Banner, Marvel’s poster child for anger-management issues, is pictured on this black 100% cotton tee that shows the mild-mannered doctor transforming into his meaner, greener alter-ego, with an image that’s reminiscent […]

What do you wear when you want to look stylish and suave, but really don’t want to be there? The Incredible Hulk Cufflinks of course. They will symbolize your dual nature. While you and your attire say, “Hey, great to be here. Sure is swell.” […]

Sometimes slaving away in the kitchen can make you mad. Why not channel that inner rage and transform into the Incredible Hulk with this Incredible Hulk Character Apron. When you bring this apron out, everyone will know that you have had enough and they can […]