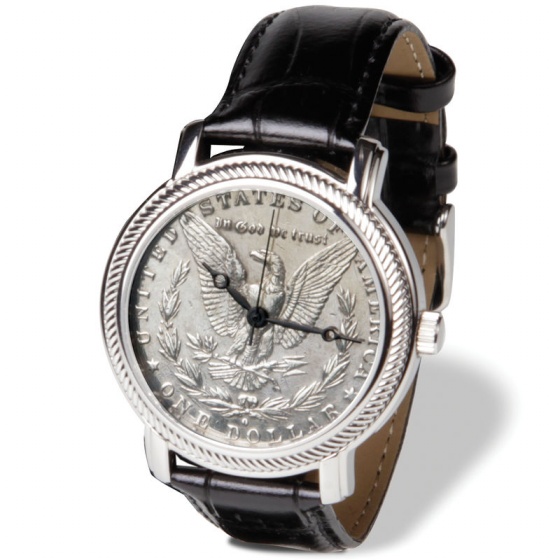 Way up on the list of creative watches are the Faceless Watch and the Backwards Watches. Another one which I think makes the cut for the list is the Genuine Morgan Silver Dollar Watch. While there’s no LED lights here or reverse quirkiness, what you actually see on the face of the watch is an actual U.S. Morgan silver dollar.

The history behind the silver dollar in itself is already quite rich. And while the Genuine Morgan Silver Dollar Watch isn’t priced at just a dollar (it’s just five cents shy from two hundred bucks), it’s definitely a fun watch sporting a classy design and a timeless dollar.

This is the timepiece that incorporates a genuine U.S. Morgan silver dollar into its watchface. Designed by English engraver George T. Morgan, the coin was minted from 1878 to 1921. With three hands, the timepiece employs the reverse side of the coin as the watchface, featuring a bald eagle, the mintmark below the wreath, and a tiny, sideways ‘M’ etched into the left loop of the wreath’s ribbon–the first U.S. coin to use the designer’s initial on both sides.

Each coin has a silver content that is 90% of 0.900 fineness and is cut cross-sectionally and surrounded by the watch case. Quartz movement provides reliable timekeeping.

The Genuine Morgan Silver Dollar Watch is available from Hammacher Schlemmer for $199.95.

My dad is one of the lucky ones. He’s pushing sixty but still has a full head of black hair that makes him look like he’s still in his late forties. I have an uncle who’s much younger (early fifties) who just opted to shave […]

The Walking Dead Morgan Pop! Vinyl Figure talks softly but carries a big stick. Sadly, this 3 3/4-inch figure doesn’t really talk because I wouldn’t mind having a TWD toy that shares the wisdom of Morgan. The man has come a long way since sort […]

The other week GeekAlerts came across the Modify Interchangeable Watches and the concept and product sounded really cool. Why spend tons of money buying new watches for different occasions when you can just modify them. Modify Watch really took this idea of interchangeable parts and […]

Sometimes the best weapons are the ones you don’t initially think about and the Walking Dead TV Series 8 Morgan Jones Action Figure adds a new one to the zombie apocalypse. When it’s kill or be killed, you’ll find a lot of people with guns, […]

This stylish chronograph is designed to allow amateur astronomers to “plan for the best viewing conditions for observations”. It tracks the phases of the moon, moonrise, moonset, sunrise, sunset, and more.