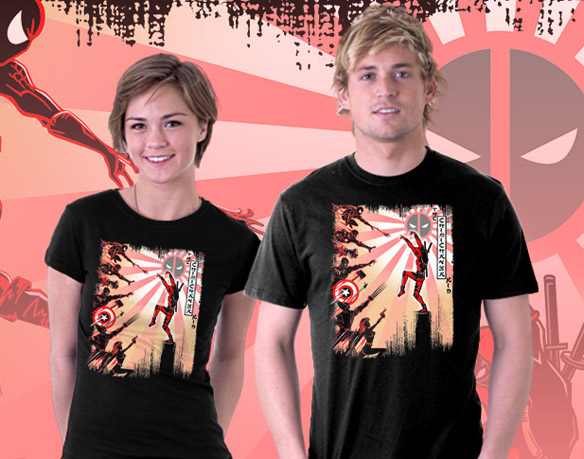 Wade Wilson prepares to battle the Avengers with a secret, unbeatable fighting technique on The Chimichanga Kid T-Shirt.

Forget the crane kick because Deadpool has perfected the move known as the chimichanga. The awesome might of this simple technique has the ability to deep-fry the strongest of opponents, making the abilities of heroes like Thor and Iron Man appear to be no stronger than spicy guacamole.

Is anyone else hungry? The appetizing image was created by artist Rob Reep. 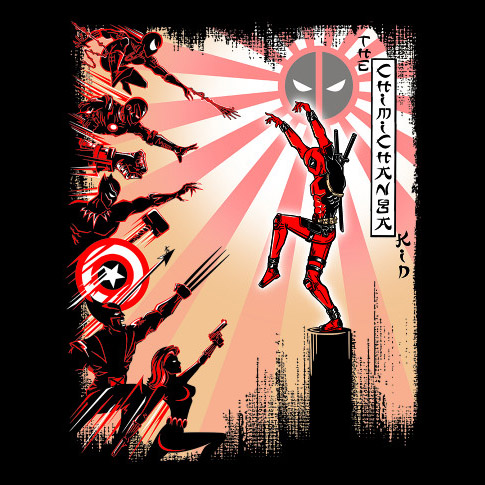 The Chimichanga Kid T-Shirt is available for $15 at TeeFury.

Hang on to your pepperoni and watch where you stick that salami because the Chimichanga Dude T-Shirt has merged a teenage mutant ninja turtle with Marvel Comics ‘Merc with a Mouth,’ Deadpool. It’s the mash-up that doesn’t make sense… until you think about it. After […]

Wade Wilson has traveled to Middle Earth and the Elves are speaking his language with the Speak Chimichanga and Enter. Deadpool has heard that adventure and gold and sexy Dwarvish women await him on the other side of the Doors of Durin. Now if he […]

Add a little spice to your life with the Deadpool Chimichanga Bottle Umbrella. The Merc with the Mouth loves eating chimichangas. He also loves serving chimichangas, especially when he can serve one to himself… and it happens to be filled with explosives. It’s an encounter […]

We have already covered some lovely geek jewelry here at GeekAlerts. Like the Retro, Transformers, Apple and Clockpunk ones. Now it’s time to let the audiophiles get a chance to dress up in some serious Hi-Fi bling bling:

Show your love for the end of the world and those who struggle to survive in it with the Ringleader Archer Samurai Kid Walking Dead T-Shirt. Everyone has their favorite TWD character and there’s a chance this shirt doesn’t have yours… but what are the […]

Plain milk chocolate not doing it for you? Maybe you want something with a bit of a kick. Some spice. Give Tabasco Spicy Chocolate a try and let it set your mouth on fire. It’s the same as regular chocolate, only it is created with […]