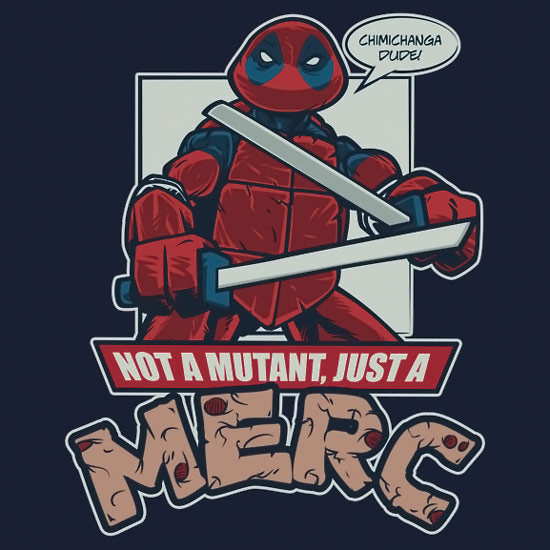 Hang on to your pepperoni and watch where you stick that salami because the Chimichanga Dude T-Shirt has merged a teenage mutant ninja turtle with Marvel Comics ‘Merc with a Mouth,’ Deadpool.

It’s the mash-up that doesn’t make sense… until you think about it. After all, the turtles are mutants and Deadpool is a mutant. You don’t want to really get into a fight with any of these characters because they’ll probably kick your butt. And, considering the attitudes of both Deadpool and TMNT, they would probably both insult you and call you names while they kicked you butt. 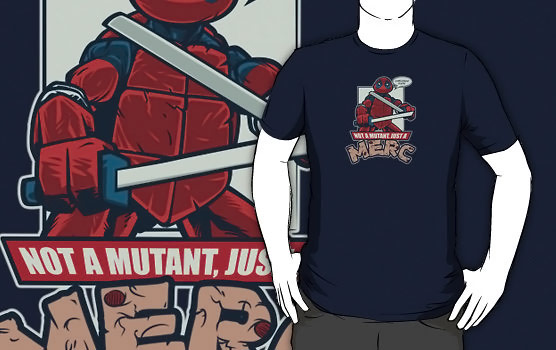 Admit it. Even if none of the Turtles adopted Deadpool’s style, you can totally see them all hanging out together, trading dirty jokes with each other and scarfing down a few extra-large pizzas.

The Chimichanga Dude T-Shirt is available for $25.56 at RedBubble.com.

Wade Wilson prepares to battle the Avengers with a secret, unbeatable fighting technique on The Chimichanga Kid T-Shirt. Forget the crane kick because Deadpool has perfected the move known as the chimichanga. The awesome might of this simple technique has the ability to deep-fry the […]

Wade Wilson has traveled to Middle Earth and the Elves are speaking his language with the Speak Chimichanga and Enter. Deadpool has heard that adventure and gold and sexy Dwarvish women await him on the other side of the Doors of Durin. Now if he […]

Nothing tastes better than lunch in half-shell, so pack your lunch in the TMNT Shell Lunch Bag to maximize your turtle power. It doesn’t matter whether you favor Leonardo, Michelangelo, Raphael or Donatello; this lunch bag represents them all. Pack pizza every day if you […]

Add a little spice to your life with the Deadpool Chimichanga Bottle Umbrella. The Merc with the Mouth loves eating chimichangas. He also loves serving chimichangas, especially when he can serve one to himself… and it happens to be filled with explosives. It’s an encounter […]