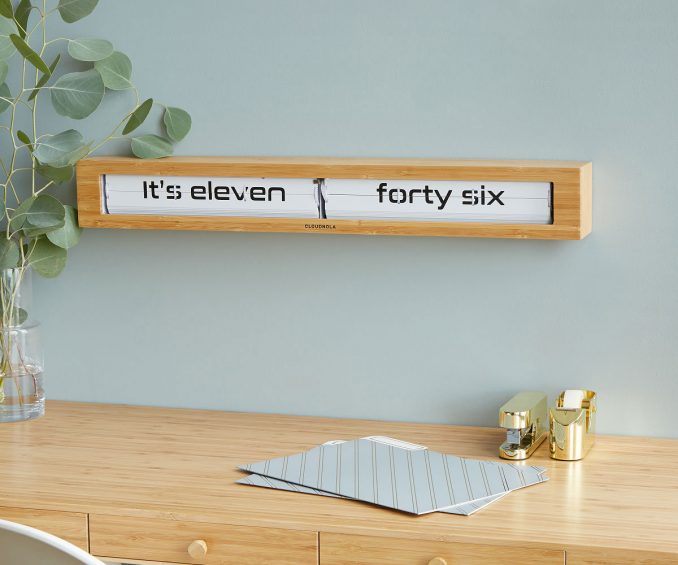 While plenty of clocks offer cool designs, most show time in one of two ways. Analog clocks have the big and little hands that rotate around the dial and digital clocks just use numbers to display the time. This Text Time Statement Clock is much more unique in that it displays the time using words just like you would say the current time to someone else.

This Text Time Statement Clock would go great in an office and would be a terrific conversation piece because it is quite unique. Although it is eyecatching, it also would match nicely with most decor in your choice of black or bamboo finish. While it is sleek and modern in style, it also has a retro flair because it uses flip tiles, like the old-school alarm clocks that were popular before LCD displays became commonplace.

When you look at the dial of an ordinary clock, your brain transforms numbers and symbols into words and meaning without a second thought. But this eye-catching timepiece skips a step, displaying the hours and minutes in conversational English. That short-circuiting of the expected adds a little buzz of delight that transforms this clock into a conversation starter and functional work of art. The display changes with old-fashioned flip tiles, which adds retro charm to the contemporary look. Its large size and handsome bamboo frame make it a visual focal point on a desk or mantle, or hung on the wall.

Available in your choice of Black or Bamboo, this Text Time Statement Clock is $300 at Uncommon Goods.

This isn’t the first clock we’ve featured on GeekAlerts that uses words instead of hands or numbers to tell the time. Other examples include the Digitless Clock, QLOCKTWO Clock, and LED Word Clock.

I’m all about weird clocks that look different and the Analog Dial Flip Clock is a great twist on the familiar flip-clock because it shows the hands of a clock instead of numbers. Because it would take a whole lot of flipping to display the […]

Ever have trouble remembering if you set the alarm to wake you up? The Flip Alarm Clock always lets you know if it’s ready to wake you up… and you don’t have to bother with fumbling around for that tiny little button to turn the […]

This Giant Flip Clock is large enough that you will always be able to read the time from anywhere in the room. It is a calendar clock that has a flip mechanism. It is stylish and super useful. You won’t be late for anything ever […]

Fans of wooden gadgets like the Carbon Neutral USB Flash Drive and the iPod Mini Speaker can now lay their hands of this USB bamboo keyboard and mouse.