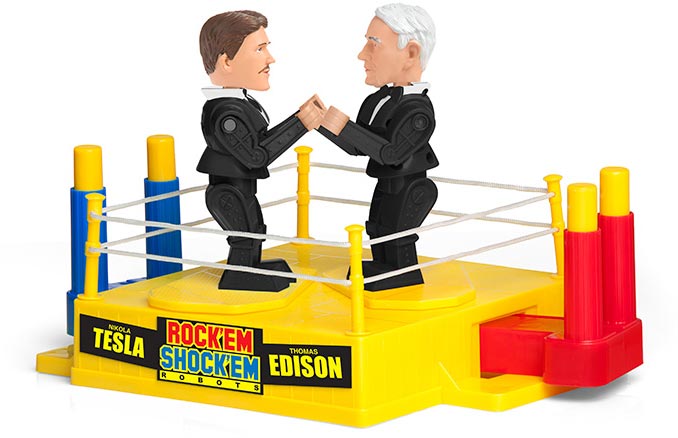 Starting in the 1880s there was a “War of the Currents” with Thomas Edison facing off against Nikola Tesla. These two genius inventors were fighting over whose electrical system would supply power to the world: Edison’s direct current (DC) or Tesla’s alternating current (AC). In his efforts to discredit AC as dangerous, Edison took to publicly electrocuting animals, which culminated in the 1903 electrocution of Topsy, and elephant from the Luna Park Zoo on Coney Island.

While the stakes aren’t nearly as high, Tesla vs. Edison Rock ’em Shock ’em Robots is a fun way to relive the battle between these two geniuses. Whose side are you on?

By pushing plunger buttons on controllers at one side of the “ring,” players make their inventor punch at their opponent’s inventor. If you hit the other guy just right, you’ll knock his block off! For something so simple, it’s shockingly fun.

Tesla vs. Edison Rock ’em Shock ’em Robots is $24.99 exclusively at ThinkGeek. Although you should be advised that they (and us) posted this on April First.

This Nikola Tesla Marble Resin Sculptural Bust is perfect for the futurist, electrical engineer, or mechanical engineer that admires the ingenious inventor. Cast in a bonded marble resin, this likeness of Nikola Tesla is extremely detailed. Below the bust is a “badge” that reads “Nikola […]

We all want a chandelier hanging in our home because it’s a sign of prestige that also happens to chase the dark away. Unfortunately, most of us don’t have a room big enough to hold such an over-sized light. The King Edison Pendant Lamp makes […]

Casio has announced a revamp of one of the models in the popular G-Shock Mini Family. It’s the Deco-G watch which now in a very limited edition (only 50 pieces will be produced) has been studded with crystals.