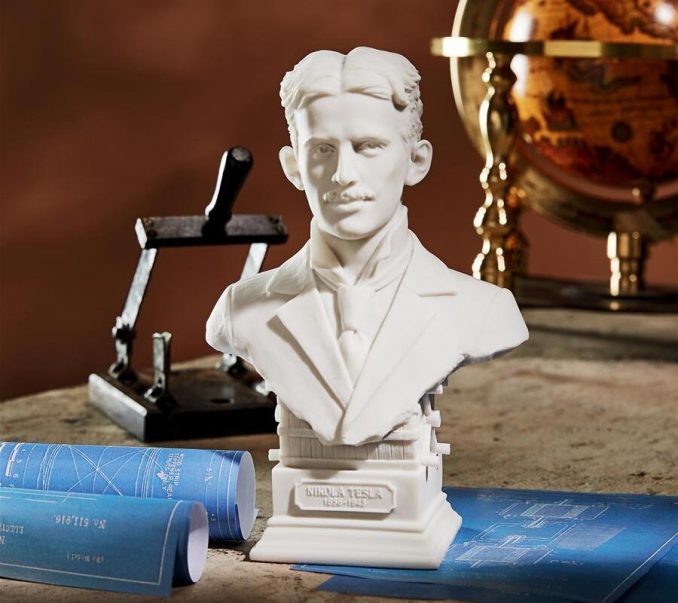 This Nikola Tesla Marble Resin Sculptural Bust is perfect for the futurist, electrical engineer, or mechanical engineer that admires the ingenious inventor.

Cast in a bonded marble resin, this likeness of Nikola Tesla is extremely detailed. Below the bust is a “badge” that reads “Nikola Tesla” and the years he lived, “1856-1943.” It is about 7.5″ tall and weighs about 2 pounds.

As an engineer and inventor, Nikola Tesla’s stellar reputation in his native Croatia awarded him a position with his very first U.S. employer (and later rival), Thomas Edison. Our artisan has sculpted the Father of AC current and modern-day Steampunk icon complete with his characteristically strong brow, and then set positioned him atop a pillar that displays his name. Cast in bonded marble resin for proud display in home or office, this Design Toscano exclusive showcases your love of the sciences and your appreciation for thinking outside the box. Makes a distinctive gift!

Nikola Tesla was one of the greatest and most prolific inventors of all time. And now you can celebrate his genius with this Nikola Tesla Bobblehead. The man was a genius and if he is one of your heroes, this bobblehead will look great on your […]

Add some fun to your outdoor space this summer with these Grande Tiki Sculptural Tables. They’re a great way to be playfully primitive with a fun Polynesian style that would look great by your pool or patio. These Grande Tiki God Tables come in two […]

Starting in the 1880s there was a “War of the Currents” with Thomas Edison facing off against Nikola Tesla. These two genius inventors were fighting over whose electrical system would supply power to the world: Edison’s direct current (DC) or Tesla’s alternating current (AC). In […]

A marble version of last year’s Mysterious Wood Clock has now been released.

Toast of the Zombie Sculptural Goblet

Just in time for Halloween, the Toast of the Zombie Sculptural Goblet should be back in stock and ready to serve the living and undead alike. Featuring a 7 ounce glass that sits at the end of a zombie arm, the Zombie Goblet is the […]

Many of us have long known that duct tape can fix almost anything that’s broken, but now this Duct Tape Engineer Book shows you that it can also be used to construct a multitude of things. With a subtitle of “The Book of Big, Bigger, […]