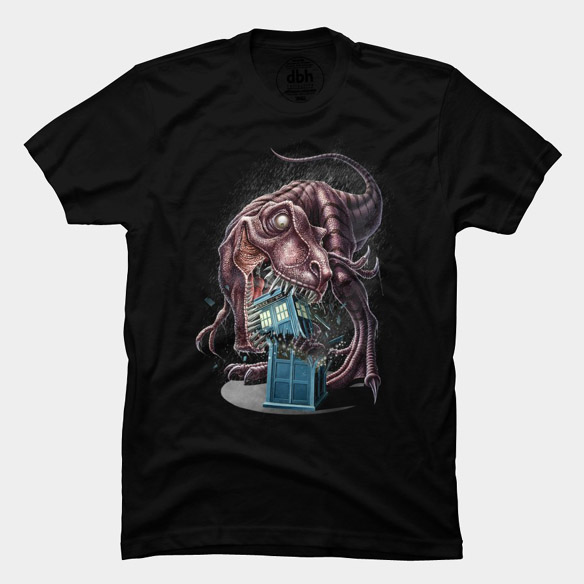 There have been plenty of dinosaurs on Doctor Who over the years but I don’t think any of them did the type of damage being inflicted on “Sexy” on the T-Rex Vs TARDIS T-Shirt.

If any other time traveler had a giant chunk ripped out of their time machine by a hungry Tyrannosaurus Rex, it would probably mean the traveler was destined to die millions of years before they were even born, but this isn’t a regular time traveler. We’re talking about the Doctor and his mighty TARDIS, one of the most powerful weapons in the universe.

Still, it looks like the Doctor will have plenty of repairs to take care of after this highly-detailed T-Rex tore the TARDIS in half.

The T-Rex Vs TARDIS T-Shirt is available for $24 at Design by Humans.

Tyrannosaurus Rex; the most feared dinosaur that ever roamed the Earth… or at least he would’ve been if the other dinosaurs hadn’t been laughing at his tiny arms. The Unstoppable T-Rex Figurine gives a peek at what could’ve happened if the giant-headed dino had gotten […]

The boogeman. Not finding a rare Pokemon in Pokemon Go. Kids have enough to be scared of, but the T-Rex Headboard is here now just in case you want to add a little more fear to their lives. Does anyone really want to sleep under […]

At last you can become a ferocious dinosaur that will instill hearts with fear thanks to this T-Rex Helmet. It fits kids and adults thanks to adjustable sizing. It also sports a pocket for storing your small things inside. Let out a mighty roar and […]