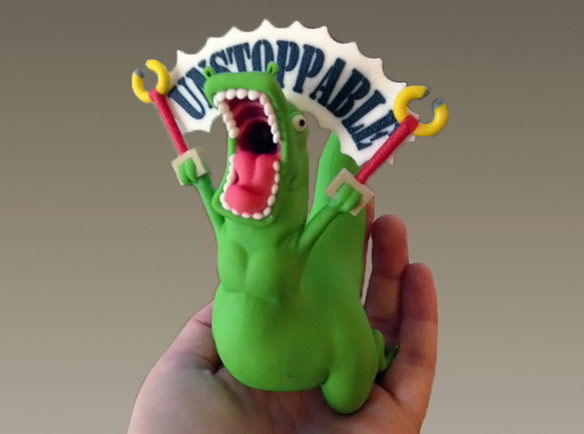 Tyrannosaurus Rex; the most feared dinosaur that ever roamed the Earth… or at least he would’ve been if the other dinosaurs hadn’t been laughing at his tiny arms. The Unstoppable T-Rex Figurine gives a peek at what could’ve happened if the giant-headed dino had gotten his tiny hands on a simple piece of modern technology.

Those extendable claws that were created to get items off top shelves and antagonize siblings while staying far enough away to avoid their vengeance become a source of joyous celebration for the now-unstoppable T-Rex, as he falls to his knees and roars to the world that he truly is the king of the dinosaurs now.

The Unstoppable T-Rex Figurine is available for $49.95 at ShapeWays.

So you want to outcool your neighbors Camarasaurus replica? No problem, that plant eater doesn’t stand a chance against this creature.

This Tyrannosaurus Light will look awesome in your room. This T. Rex is not life size, thankfully, but it will light your space with a warm dino-glow. He stands about 10 inches tall and makes a perfect nightlight for kids big and small. Guaranteed to […]

The mighty Tyrant Lizard, Dr. Ian Malcolm’s favorite dinosaur in Jurassic Park, is ready to become king of the bottles with the Tyrannosaurus Rex Dinosaur Bottle Opener. With a big head and tiny arms (hello fellow fans of Meet the Robinsons), this cast-iron dinosaur is […]

It’s a dinosaur. It’s a pen. It’s the Tyrannosaurus Pen. It may be time to start writing that great American dinosaur novel with this awesome-tastic pen/dino figure. Just pull the T. rex’s tail to reveal the pen. Buy two and you can have some literary […]

There have been plenty of dinosaurs on Doctor Who over the years but I don’t think any of them did the type of damage being inflicted on “Sexy” on the T-Rex Vs TARDIS T-Shirt. If any other time traveler had a giant chunk ripped out […]

It doesn’t take an archaeologist to dig this cool mug. This T-Rex Fossil Mug looks like a T. rex fossil and has a dimensional skeleton on the body of the mug, while the tail bones form the handle. Perfect for anyone who is a Tyrannosaurus […]

The boogeman. Not finding a rare Pokemon in Pokemon Go. Kids have enough to be scared of, but the T-Rex Headboard is here now just in case you want to add a little more fear to their lives. Does anyone really want to sleep under […]

This R/C T-rex might be small in comparison to the replica we saw a few days ago, but it’s still impressive with its 81 cm (31.9 inches) in length.