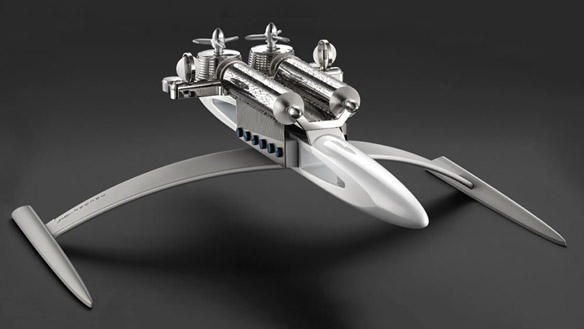 If a vintage music box was designed for the sci-fi crowd, it would look just like the Swiss Musical Starship because that’s exactly what this sleek spaceship is.

Music boxes are cool but the awesome-factor has just been launched into the stratosphere with this geeky spin that combines a sharp futuristic design with iconic tunes that any Star Wars and Star Trek fans will instantly recognize.

The starship, which was crafted in Sainte-Croix, Switzerland, plays 35-second snippets from the Star Wars theme, the Star Trek theme, and the Imperial March from Star Wars. For those times when you don’t want to boldly go where nobody has gone before in a galaxy far, far away, the second included cylinder plays three classic rock songs (The Wall, Smoke On The Water, and Imagine).

Taking the form of a minimalist-designed starship, the music box’s body is made of black-lacquered walnut with a brass vibration plate that provides optimal resonance, while its twin outriggers are made from anodized aluminum. A nickel-plated brass cylinder treated with resin for sonic clarity rotates via a precise Cartel 4.144 movement, its wire pins are plucked by a 72-note tempered-steel comb in perfect time. Each tooth in the comb is tuned to a specific frequency; lower notes are weighted for optimal sonority and dampened by synthetic “feathers” for mellifluous tone.

Let your love for music blast off with the Swiss Musical Starship for $31,500 at Hammacher Schlemmer.

Ideally we all want to seem smart and sophisticated while still maintaining our cool; I even took a classical music class in college.  A good mix would be somewhere between Big Bang Theory’s Sheldon and Lost’s James “Sawyer” Ford. It’s doubtful that you’re going to […]

This Star Trek Enterprise Starship Fleece is great for cold nights when you are planetside. This Star Trek TOS Enterprise throw has glitter to capture the starlight. It is a 45″ x 60″ 100% polyester fleece blanket that has stars that twinkle when light hits […]

The Star Trek Enterprise Starship Collection gives you not one, not two, but three Enterprises. You get Enterprise C, D, and E, plus stands. All three ships are hand-painted metallic resin and you also get a descriptive book about these fine ships from Starfleet. Star […]

Do you find it hard to comb your mustache and open a beer at the same time? No more, my hairy-lipped fiends. Now you can do both with this handy Mustache Comb Bottle Opener. Have a comb, open a brew. This tool keeps you groomed […]

This Star Trek Starship Parking Tin Sign is perfect if you have your own parking spot for your Constitution class starship. If you don’t, it will look pretty sweet on your wall too. It features the USS Enterprise NCC-1701 from Star Trek: The Original Series. […]

This Star Trek Musical Watch is perfect for fans of the original Star Trek. The watch face features the Star Trek emblem and the second hand is actually the Starship Enterprise, orbiting the watch every sixty seconds. How awesome is that? Just press a button […]