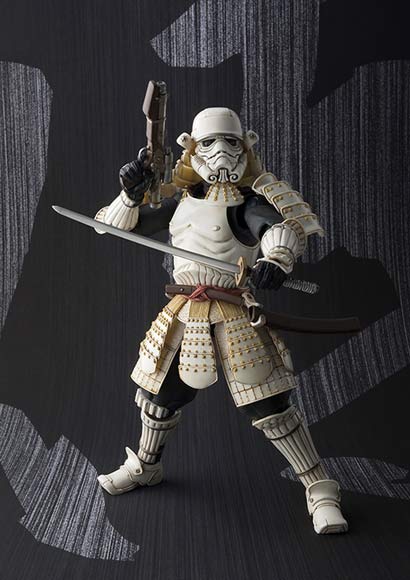 Forget about the galaxy far, far away because the Imperial forces have landed in Feudal Japan with the Stormtrooper Samurai Taishou Action Figure.

Standing 6.7-inches tall, this PVC figure features a stormtrooper with his armor redesigned to look like a Samurai warrior. He’s still carrying a blaster (which now has a cool Steampunk-style design) but he’s also armed with a katana. The figure comes with interchangeable hands to provide a variety of posing options for display.

The Stormtrooper Samurai Taishou Action Figure will be available May 2015 but it can be pre-ordered now for $110 at JBox.

The Force is strong with the Darth Vader Samurai Action Figure, the Dark Lord of the Sith who is determined to rule Feudal Japan. You saw the Stormtrooper Samurai Taishou Action Figure but every Stormtrooper needs a leader, and that leader has arrived in the […]

Sleek, masterful, and graceful. Those are words that can describe the Samurai Shelf in a nutshell, which is a unique and masterfully done shelf that probably takes after the people it was named after.

Studying the way of the warrior probably doesn’t include lessons on how to avoid getting wet when it rains but you don’t need any fancy training to help you stay dry when you’re armed with the Samurai Umbrella. With a handle designed to look like […]