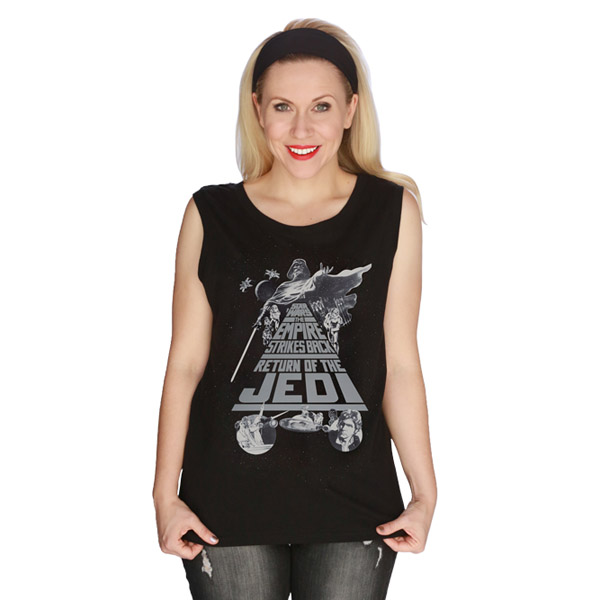 It’s as much a part of the Star Wars universe as the Force. The epic Crawl that sweeps across the screen at the beginning of Star Wars I through VII, letting fans know about events that have led up to the movie they’re about to watch. Now the original movies (A New Hope, Empire Strikes Back, and Return of the Jedi) have their titles appear in the form of the Crawl, along with images from each film, on this black muscle tank top.

The Star Wars Trilogy Poster Muscle Tank is available for $25 at Her Universe.

Flex some muscle with the new droid on the block with the Star Wars The Force Awakens BB-8 Muscle Tank, and let everyone know how you roll. Do they see you rollin’? Are they hatin’? It’s understandable because you’re rocking the fashion scene like a […]

If you fear that you will soon have a sagging jawline that sometimes comes with old age, then worry not by doing what you can to prevent it. Keep your chin in shape with the Rhythm Slim Chin Muscle Exercise machine that will let you […]

If you want to look like you just stepped off display from “Bodies…The Exhibition,” then slip into this Premium Muscle Morphsuit. Zombies, vampires and Lady Gaga’s meat dress are freaky, but they don’t hold a candle to the looks of the human body’s innards. Wearing this […]

Get ready for some iconic Star Wars goodness to wrap around your wrist with the Star Wars ‘The Crawl Wrap’ Bracelet. Every Star Wars fan in the world knows the thrill. You’re sitting in the dark theater, and those words appear on the screen. A […]

These eye-catching Batman v Superman Muscle Tops let you transform yourself into either the Man of Steel or the Dark Knight. Sun’s out, guns out, and now you can display those super guns with these cool shirts. Made of 86% Polyester and 14% Elastane, you […]