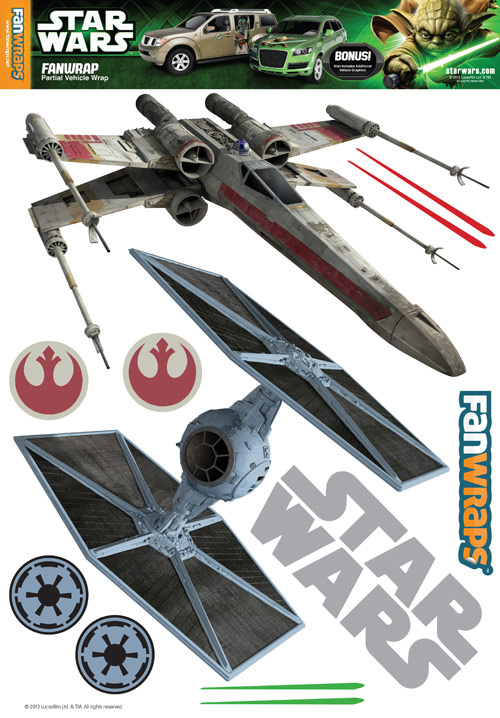 Jazz up your car with some Star Wars style. These Star Wars TIE Fighter and X-Wing FanWraps Car Decals will make your car a rolling geek spectacle. In a good way.

Vader finds your lack of decals disturbing, so get these for $29.99 at Entertainment Earth. Also at Amazon.com.

Do you want to let people know you’re prepared when the dead start rising from their graves? The Zombie Outbreak Hunting Unit Orange FanWraps Car Decals will let others know they’re safe with you because you’ve been preparing for this your whole life. When the […]

Wanna deck out your car like Fett’s Vette? Slave I I mean. Not technically a Vette, but a really cool ship. Anyway, if you want some Boba Fett on your car, look no further than this Star Wars Boba Fett FanWraps Car Decal. It takes […]

This Star Wars Slave Leia FanWraps Car Decal is fun and sexy in a totally appropriate cartoon way. This decal will take your vehicle from average to amazing. Now you can deck out your car with an awesome animated version of Princess Leia Organa. You […]

Decorate your home of office with these Roommates Star Wars Classic Wall Decals. These peel and stick wall decals are perfect for places like offices and dorm rooms, because these stickers are easy to remove and reuse. Although this set comes with 31 Star Wars […]