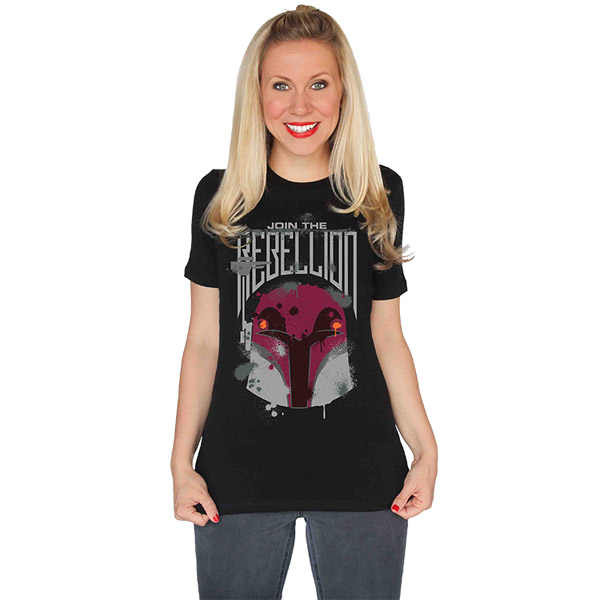 Boba Fett? Where? Not here because the Star Wars Rebels Join The Rebellion T-Shirt features a new Mandalorian warrior that’s blasting her way into the hearts of Star Wars fans.

In Star Wars: Rebels, colorful Sabine Wren is as talented with a paint gun as she is with a blaster and she makes sure to let the Imperial forces know she’s been around by tagging TIE fighters with the iconic starbird logo, in addition to using special paint bombs to turn Stormtroopers from boring white to eye-catching blue. This black tee features Sabine’s custom-painted Mandalorian helmet, along with the words, ‘Join the Rebellion.’

The Star Wars Rebels Join The Rebellion T-Shirt is available for $25 at Her Universe.

These cool Join the Rebellion Active Leggings will help you keep active and stay comfy. You are going to look great in these while you have lightsaber battles. They have the phrase “Join the Rebellion” on the leg. Look good while fighting the Empire. Join […]

This Join the Rebellion Unisex Cardigan is a cool piece of clothing and also a recruitment poster. It features varsity-style RBL letters on the chest and the Join the Rebellion design screen-printed on back. Wear it proudly and advertise the rebellion. Star Wars Join the […]

Zelda fans will love this handmade Zelda Bomb Bag with 3 Blue Bombs. The roughly 6 inches tall, the blue bombs are crocheted with soft acrylic yarns and stuffed with polyfill. The perfect size to carry and throw at your Nintendo loving friends and family. […]

The Millennium Falcon might have problems with it but the hyperdrive is working just fine on the Star Wars Rebellion Muscle Raglan T-Shirt. This eye-catching 50% cotton/50% polyester muscle tee is ready to send your fashion into hyperspace with an attention-grabbing image that blends together […]