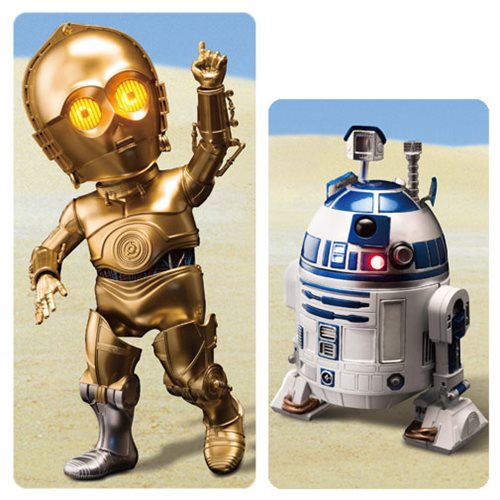 That’s why you can get them both in this Star Wars: Episode V – The Empire Strikes Back R2-D2 and C-3PO Egg Attack Action Figure 2-Pack.

These two look absolutely adorable in their Egg Attack form. Both of these figures are painted with expert technique. They look awesome. The light-up function in the display, processor state indicators, and holographic projector matches the movie setting in Star Wars: Episode V – The Empire Strikes Back.

The R2 figure features built-in Princess Leia projection function just like the movie! How cool is that? R2-D2 also comes with three extending arms, one extending life scanner, and one extending periscope! The 6-inch C-3PO action figure even has a special hinge design, so that the limbs can be scattered just like in the movie.

The Star Wars R2-D2 and C-3PO Egg Attack Statues are the droids you’re looking for if you’re a fan of the fussy protocol droid and his faithful, ever-reliable, astromech partner. Standing 5-inches and 6-inches tall, respectively, R2-D2 and C-3PO are ready to light up your […]

This Star Wars: Episode V – The Empire Strikes Back Darth Vader Egg Attack Figure is pretty adorable. It makes the fearsome Vader a little less fearsome, but no less awesome. He has 21 points of articulation and is made with compound material. The figure […]

I know the serious Christmas shopping doesn’t start until after Thanksgiving and most people don’t get their trees until the first week of December, but sometimes you have to act fast. With something as cool as the Star Wars C-3PO Christmas Light Set, you might […]