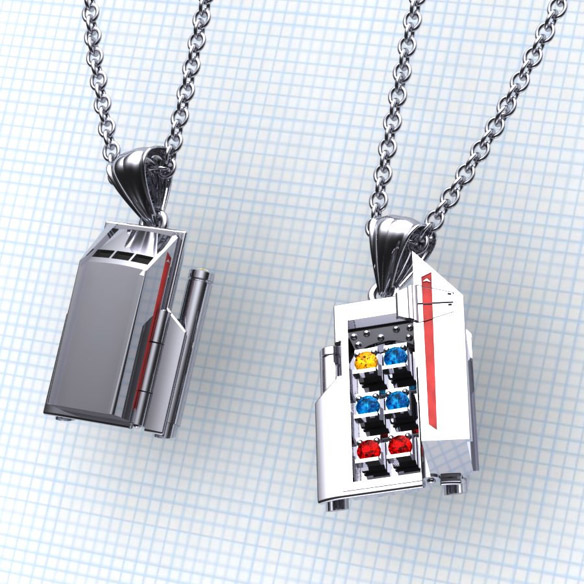 Show your love for the original five-year mission with the Star Trek Galileo Shuttlecraft Necklace, and let your fashion boldly go where it has never gone before.

Jewelry designer Paul Michael has shown us some awesome geek jewelry in the past and he just keeps knocking it out of the universe with each new design. This time around, he brings us the Enterprise’s shuttlecraft, Galileo, which got a decent amount of screen time in the original series, despite the fact that Kirk and the gang had access to a transporter that could teleport them to a planet’s surface within seconds.

The shuttle itself is available in a variety of metals, and the top opens to reveal either natural or created stones to symbolize the crew. You get to select the colored stones so you can mix things up with a variety of yellow, blue, and red, or just fill the shuttle to the brim with nothing but red… which would inevitably result in nothing but death and destruction because all Trekkers know red shirts = cannon fodder. The chain is sold separately.

The Space Shuttle era is over, with Space Shuttle Atlantis due to land in less than one hour from the final mission. However, the legacy lives on in a new Space Shuttle set from our favorite building block maker: the Lego Space Shuttle Expedition #10231. […]

Wear Starfleet proudly around your neck and let everyone know that you support the Federation with this Starfleet Necklace. You know Kirk would wear it is he was allowed to by the Starfleet dress code. You will look great in this stainless steel Star Trek […]