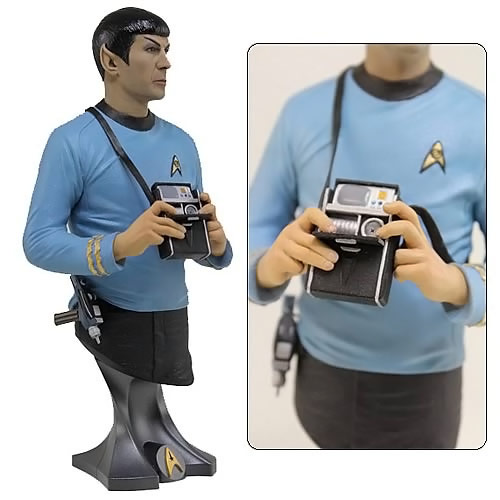 No disrespect to Zachary Quinto because he made a believer out of me as Spock in the new Star Trek films, but Leonard Nimoy is always the first pointy-eared face I think of when I picture Kirk’s second-in-command, and this limited-edition bust from Titan Merchandise delivers high-quality detail that perfectly captures Nimoy’s Mr. Spock, as well as perfect replications of the Starfleet uniform, tricorder, and phaser.

The Star Trek First Officer Spock Maxi Bust will beam into availability in late August, but can be pre-ordered now for $79.99 at Entertainment Earth and Amazon.com and £49.99 at Forbiddenplanet.com.

If your Star Trek collectibles need a little life support, you probably need the Star Trek Dr Leonard “Bones” McCoy Sixth-Scale Figure. According to Dr McCoy’s many outbursts during the Enterprise’s five-year mission, the good doctor isn’t an engineer, a bricklayer, an escalator, a magician, […]

An iconic officer of the Starship Enterprise gets colorful on the Star Trek Spock Art Print. It’s probably safe to say he’d consider this treatment highly illogical. With a color scheme that might bring to mind the promo poster for Star Trek: The Motion Picture, […]