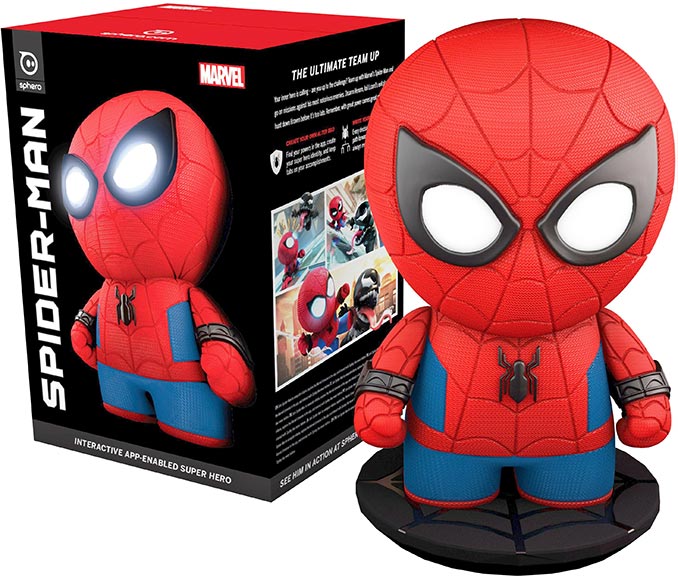 This Sphero Spider-Man Interactive Super Hero is one sophisticated toy. It has advanced technology like motion-detection and advanced speech recognition, so he can actually interact with you. One of the coolest features are his emotive eyes, which animate via LCD screens to express his thoughts and emotions. (Check it out in the video below, and on the videos at BestBuy.com.)

Sphero Spider-Man features both Wi-Fi and Bluetooth connectivity allowing you to get content updates and interact with the free app (supports iPhone and Android). This app-enabled interactivity allows you to team up to go on missions and battle villains.

Join forces with this voice interactive Spider-Man and enter the Marvel Universe like never before. Embark on missions against notorious villains and watch your unique journey evolve. Spidey’s Wi-Fi capabilities allow for new missions, villains, and other automatic updates. When not fighting bad guys, strike up some snarky banter with your friendly neighborhood hero. The tech in this interactive, immersive, and intellectual Spidey empowers you to be his heroic ally. Team up. Hang out. Fight Villains. Hero stuff.

Keep enemies out of your room with this fully animated Spider-Man toy. His LED eyes light up when he detects movement with his motion-detection technology, and speech recognition lets him engage in two-way conversations. Hook this Spider-Man toy up to the Internet via Wi-Fi for new adventures, missions and updates.

While everyone knows R2-D2, not as many people are familiar with another R2 series astromech droid, R2-Q5. You may not remember, but R2-Q5 was on the Death Star II in Return of the Jedi. He basically looks like a black edition R2-D2. With this Sphero […]

Sphero makes really cool app-enabled robots that can race, do  tricks, and all kinds of fun things. In addition to products like Ollie and Sphero Mini, they also have licensed products like Star Wars droids, Marvel Spider-Man, and Disney-Pixar Lightning McQueen. Right now you save […]

If you’ve ever played Super Mario or Mario Brothers, then you know what those boxes with the huge question marks are. They’re coin blocks that you’re supposed to have Mario or Luigi bang his head on to get coins, a power-up, or maybe the occasional […]

You might remember this Web Camera with Interactive Games from earlier this year. Aneo, the company behind the product, has now released a new version of this computer accessory.