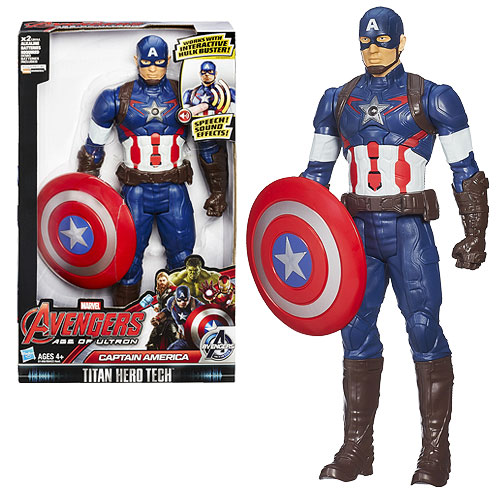 This 12 inch Captain America is armed with a shield, articulated limbs and also has real speech. That’s because this figure is interactive, which means that it can communicate with the Avengers: Age of Ultron Titan Hero Tech Interactive Hulk Buster Iron Man Action Figure, which is sold separately.

Only $25.99 from Entertainment Earth. Pre-order him now and he ships in March.

These Avengers Age of Ultron Plush Toys are so soft and cuddly you will want to snuggle them every day. You can choose Black Widow, Captain America, Hulk, or Iron Man. Aside from being huggably soft, they also have flat-bottomed feet for easy display and […]

Get ready for some larger-than-life patriotism with the Avengers Titan Hero Captain America 12-Inch Action Figure. Based on the Avengers Assemble TV series, this star-spangled warrior stands an impressive, flag-waving 12-inches tall. The figure is articulated, allowing him to be moved into a variety of […]

This Avengers: Age of Ultron Titan Hero Series Iron Man 12-Inch Action Figure is a must for your Avengers collection. Very few heroes are as powerful as Iron Man and this version is ready to blast off into your action figure collection. It depicts Iron […]

This Avengers: Age of Ultron Ultron Hero Remix Bobble Head is the perfect desk accessory for Avengers fans. Let Ultron defend you right on your desk! This stylized bobble head of the artificial intelligence known as Ultron comes on an Avengers-themed display base and measures […]