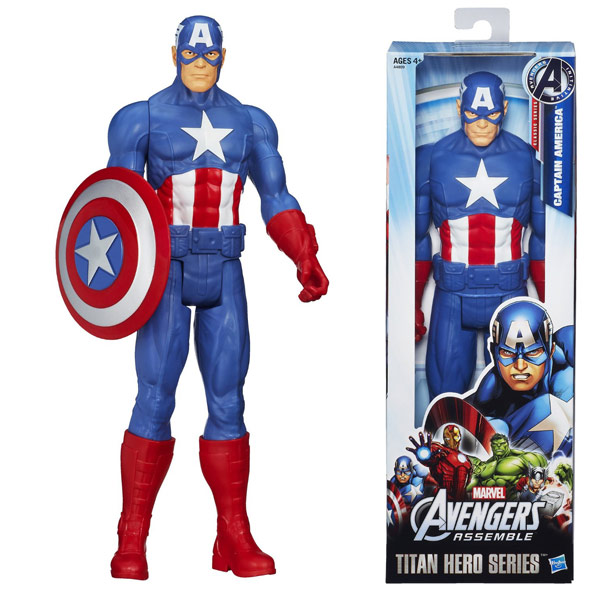 Get ready for some larger-than-life patriotism with the Avengers Titan Hero Captain America 12-Inch Action Figure.

Based on the Avengers Assemble TV series, this star-spangled warrior stands an impressive, flag-waving 12-inches tall. The figure is articulated, allowing him to be moved into a variety of poses, and his iconic shield is included.

If you’re more into collecting than playing, you’ll be thrilled to know Cap comes in a stylish box with a window that allows you to gaze upon the super soldier’s magnificence without actually having to open the box.

The Avengers Titan Hero Captain America 12-Inch Action Figure is available for $12.99 at Entertainment Earth and $9.47 at Amazon.com.

This Avengers Titan Hero Series Thor 12-Inch Action Figure will stand tall in your collection and guard it against evildoers. It is a giant action figure for a giant hero. The Norse hero from the movies and comics comes alive, standing 12-inches tall, with 5 […]

This Avengers: Age of Ultron Titan Hero Series Iron Man 12-Inch Action Figure is a must for your Avengers collection. Very few heroes are as powerful as Iron Man and this version is ready to blast off into your action figure collection. It depicts Iron […]

This Spider-Man Titan Hero Series Spyder Knight 12-Inch Action Figure stands 12 inches tall. He features awesome looks and basic articulation. This large size action figure will inspire kids imagination to create giant-sized battles! Especially if they get other figures in the series. This is […]