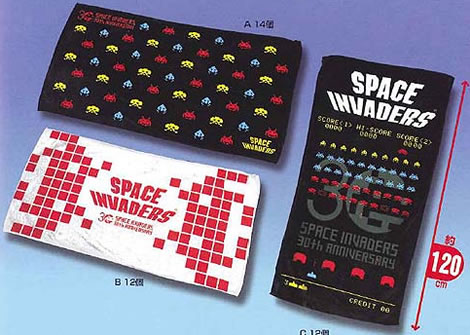 Fans of retro video games will soon be able to get their hands on some new cool Space Invaders 30th anniversary bath towels.

Measuring 120cm (47.24″) in length and thirsty, the cotton towels come in three varieties but we’re partial to the white one decorated with menacing red invaders. If we were goaded into choosing a second one, we’d probably nab the one on the right of the product photo.

The three varieties are as follows:

The Space Invaders 30th Anniversary Bath Towels can be pre-ordered from the NCSX shop. They will ship in mid-late June 2008 at US$19.90 per towel.

Engage the Borg in your bathroom thanks to this Borg Bath Towel Set. You will love adding these towels’ biological and technological distinctiveness to your own. You get a black bath towel that has an embroidered row of grey and green Borg circuitry and a […]

Make bathing the final frontier with this stylish Star Trek 3-Piece Bath Towel Set. Because as a Star Trek fan, you want nothing but the best. This set of towels would fit right in on the Enterprise and they will look great in your home […]