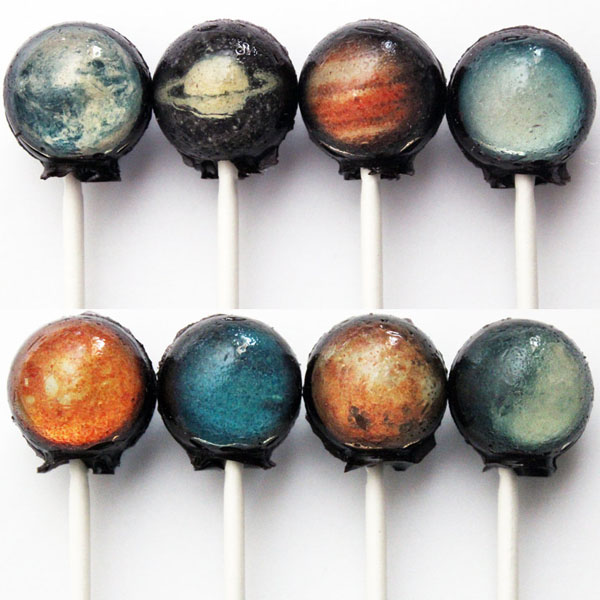 Forget about having the whole world in your hand. Soon you can have the entire solar system in your hand if you order Solar System Hard Candy Lollipops.

Better yet you can start devouring the entire solar system, starting with the sun. It might take you a while because these lollies are almost as big as giant gobstoppers. Once you get the hang of it though, you can work your way outward and in order; My, Very, Educated, Mother, Just, Served, Us, Nine, Pizzas.

Notice how Pluto is still being considered a planet in this case? Beware of geeky galactic debates that could ensue on the subject of the Milky Way.

These particular suckers are so much in demand that you cannot have them until 2013. Did SETI and NASA get together and order a big truckload or something? Geez. Anyway, the planets will be worth the wait because they twinkle like the stars and taste like strawberry or cotton candy. I bet you were thinking they’d taste like dirt, rocks and sand.

Solar System Hard Candy Lollipops by Vintage Confections can be pre-ordered through Etsy.com for $17.50 for a set of 10. They would make great party favors or would look geekalicious atop a birthday cake for an astronomy-themed party.

If you happen to be looking for game ideas, kid and adults will have fun sending the Inflatable Solar System planets into orbit. And you don’t have to worry about injuries since inflatable balls only lead to low-impact collisions. For added some drama, you might want to invite an Inflatable Alien to the party.

These Planetary Lollipops will have you eating the solar system. You get a set of 10 handmade lollipops with encapsulated images of objects from our solar system. The Earth is cotton candy flavored since it is so awesome and we love it. Now you can […]

If you need an emergency light that doesn’t take up a lot of space or use batteries, the LuminAID Inflatable Solar Light will brighten your day. The name basically says it all when it comes to the basics. This bit of goodness from LuminAID is […]

A while back we brought you Lollipop Pipes, and today for 420 Day 2012 we present Kush Kandy Lollipops. These candy lollipops are made with real hemp oil, but are totally legal. Choose your flavor between Reefer Red, Golden Leaf, or Goody Green. You know […]

Is your child into astronomy? Does he or she spend all day and night thinking about and gazing at the stars? Well, if so, they will love this Inflatable Solar System Set. It’s perfect for creating an awesome space themed playroom or bedroom. Each planet […]

If you love her enough to give her jewelry, give her the entire solar system around her neck with this Complete Solar System Necklace. Your world revolves around her after all. You get 8 planets + the Sun + little old Pluto. This is the […]