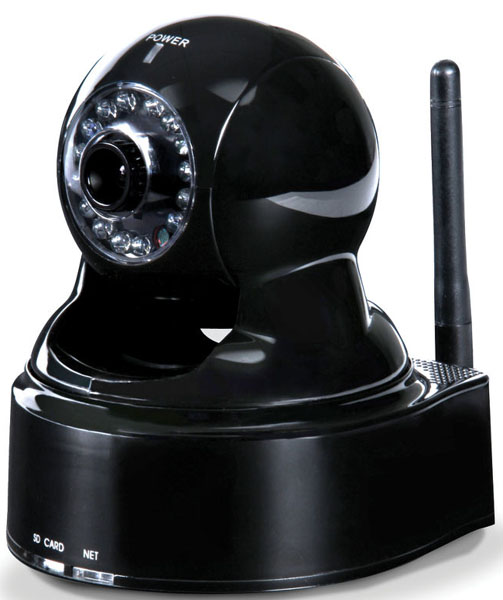 I love espionage stuff and geeky spy gadgets like: the Electronic Spy T-Shirt, Spy Keychain and even the AK47 Bullet Ice Cubes.  My dream job is to be a 007; and not just for the obvious female perks.  Sadly, my skills and intelligence are nowhere close to that of Sean Connery; so I guess I’ll have to stick with the over-the-counter stuff like the Smartphone Home Monitor.  This spy camera has 640 x 480 resolution, 15 IR LEDs, records via SD card and has the ability to pan up to 270º and tilt it up to 125º with the website controls.  Sounds pretty cool and with its motion senor and real-time video uplink to your smartphone, this makes a nice little home protection device.

This is the security camera that allows you to monitor your home from a smartphone. The camera sets up anywhere in a home and transmits realtime video over the Internet to an iPhone or Android-driven smartphone. A website allows you to pan the camera up to 270º and tilt it up to 125º for optimal remote positioning. The camera transmits 640 x 480 resolution video at 30 fps and has 15 infrared LEDs around the lens for night-vision surveillance. The camera’s motion detector automatically sends you an email when it detects movement and saves a 30-second video recording to an SD card (2 GB card included). Connects to a computer via the included Ethernet cable or WiFi. Also compatible with computers running Windows 7, Vista, XP or Mac OS X 10.5 or later. Plugs into AC. 5″ H x 4″ W x 5″ L.

You can get this Smartphone Home Monitor from Hammacher Schlemmer for $249.95.

It seems as if even Sony has entered the mysterious world of spy gadgets with this fully functional digital alarm clock AM/FM radio featuring a built-in camcorder with motion-activation functionality.