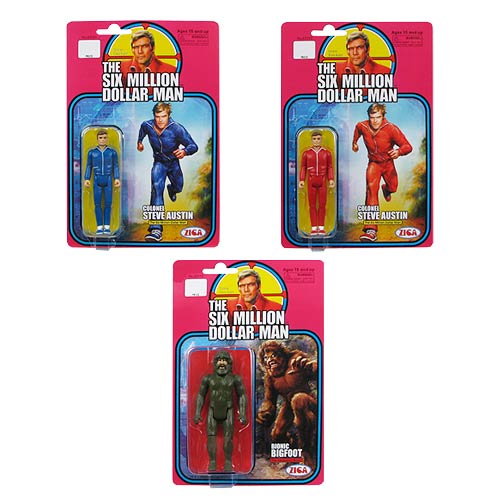 These figures are sculpted in the classic Kenner style and are 3 3/4-inch scale. This is what they would have looked like back in 70’s had they made them. This set has Colonel Steve Austin in red tracksuit, Steve Austin in blue tracksuit and Bionic Bigfoot.

This set is just $49.99 from Entertainment Earth.

The truth is out there and the Bigfoot Chewbacca T-Shirt proves that Bigfoot really doesn’t exist. That old blurry photo simply captured a Wookiee taking a break from battling the Empire. Almost everyone has probably seen that old, fuzzy, black-and-white photo of a blurry shape […]

Bionic Ear – Be Your Own Spy

This spy device acts as a bionic ear, allowing you hear faint sounds up to 20-30 meters (66-98 feet) away, and loud sounds at 100 meters (328 feet) with the included stereo headphones.

Does Bigfoot really exist? He does now and he is on your tree! This Bigfoot Glass Ornament will put the Sasquatch right on your tree, which is kind of his natural element. All you have to do is hide this 6 1/4-inch tall Bigfoot Glass […]

Do you believe in Bigfoot? Maybe these Bigfoot Bandages will convince you. You have to believe in a creature that helps heal your ouchies. He probably endorses these bandages because he walks around in the woods all day getting cut up. Now he wants to […]

These Bigfoot Playing Cards will let you contemplate the mythical beast known as Bigfoot while you deal out everyone’s hand. They are the perfect cards for researchers of cryptids who also enjoy a good card game. This deck of cards will be hours of fun […]

This Bigfoot Search Kit Lunch Box will let everyone know that you are on the hunt for the elusive Bigfoot. This lunch box is perfect for your next Sasquatch expedition. It measures about 7 3/4-inches wide x 6 3/4-inches tall x 4 1/8-inches long. It […]

This is as close to Bigfoot as you will ever get. With the Bigfoot Pendant ($80) you can have him/her/it hanging around your neck 24/7. The elusive creature has made its debut! A large flat metal pendant That both guys and girls love to claim. […]