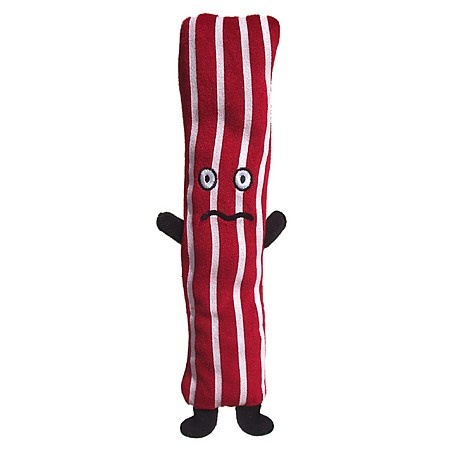 Contrary to what its name might suggest (and just in case you’re not very familiar with Mr. Toast and his other appetizing friends), the Shaky Bacon Toy doesn’t actually shake–without your help, that is.

Shaky Bacon is actually one of the characters thought up by Daniel Goodsell, and he comes alive (as close to life as it can possibly get, anyway) with the Shaky Bacon plush toy. It’s just an ordinary-looking bacon plush because it’s got a pretty mean personality with a matching mean expression.

For a friendlier strip of bacon, we suggest checking out the My First Bacon Talking Plush instead. 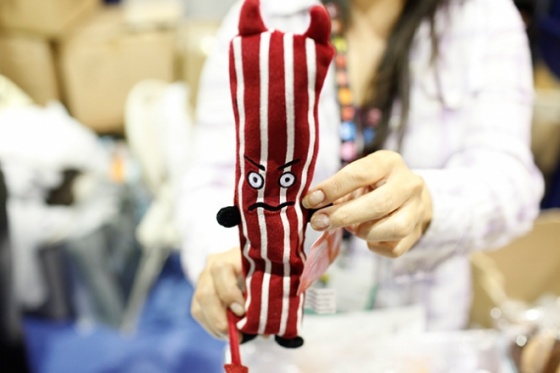 Shaky Bacon is not just a regular slice of bacon. He spends his time watching people out his window and fretting about their doings. He amuses himself sewing post-it trousers, dressing as a street cleaner, playing racing cars with Mr. Toast or cleaning the house with his flower apron on.

This toy makes a perfect gift for bacon gourmets and for anyone wishing to enter the enthralling world of Mr. Toast and his friends, created by Daniel Goodsell.

The Shaky Bacon Toy is available from Curiosite for $7.79.

If there’s ever a piece of toast that looks jaded, it would be Mr. Toast in his plush version. The Mr. Toast Plush Toy looks like a regular piece of toast with some eyes, a straight mouth, and a pair of hands and feet that’s […]

The power of bacon helps us overcome many obstacles, but one you may not have realized is that bacon gives us the strength to efficiently open envelopes. Introducing the handcrafted Bacon Letter Opener. Ergonomically curved for a comfy fit in the hand, the bacon letter opener […]