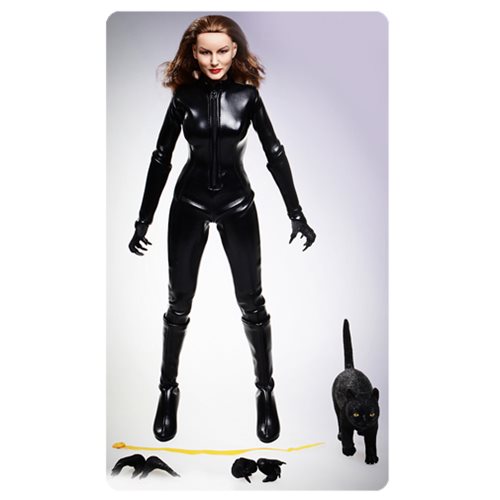 Fans of the classic Batman TV series might want to get their paws on this purrrfectly cool Secret Lives of Julie Newmar 1:6 Scale Action Figure.

What if Julie Newmar did more than pretend to be a feline femme fatale across from Adam West and Burt Ward? That’s the premise of the Secret Lives of Julie Newmar comic book, which inspired this action figure. If you haven’t read it, you need to because it involves Julie Newmar going back in a time as a time-traveling secret agent who just happens to wear a skintight outfit that looks very familiar to Bat-fans.

In addition to an outfit that includes removable sleevelets, a belt, and knee boots, the figure also comes with interchangeable hands, a display base, and a kitty cat… because, ya know, Catwoman.

The Secret Lives of Julie Newmar 1:6 Scale Action Figure will be available November 2016 but it can be pre-ordered now for $149.99 at Entertainment Earth.

Relive one of your favorite figures from childhood, in jumbo size. This Marvel Secret Wars Hobgoblin Jumbo Action Figure has been digitally scanned from the original Mattel Secret Wars figures and reproduced as a 12-inch tall collectible. All of the details are here. This fully-articulated […]

GeekAlerts has shown a lot of cool belt buckles lately and we thought it was only fair to show a few belts that would be more fitting for that special lady in your life. The Hello Kitty Seat Belt Clothing Belts are designed to function […]

GeekAlerts has shown you cool Doctor Who Over the Knee, Knee-High and Crew Cut Socks in the past, but these Doctor Who TARDIS Knee-High Socks are even better looking. Officially licensed, these black knee-high socks feature an allover blue TARDIS print that will have fans […]

Baby’s got to crawl, but you can make it less painful and a whole lot more comfortable for them with these Crawlings Knee Pads. I’m sure you’ve done some crawling as an adult and know how uncomfortable it is, especially if your knees happen to […]

These Geek Motif Ladies Knee Socks will look super cute on any geek girl. These cotton blend knee socks come in several styles for geek girls who want to fly their geek flag at ankle length. These socks will fit women’s shoe sizes 5-10. If […]