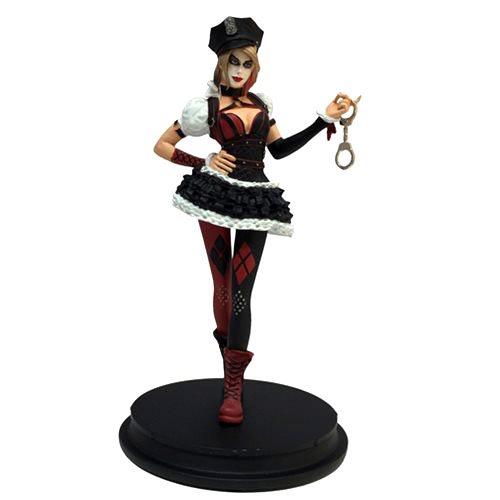 Standing 8-inches tall, this polystone resin paperweight features Harley Quinn as she sometimes appears in the Batman: Arkham Knight video game, and she’s ready to work two jobs. Either use her as a paperweight or just set her on a shelf or desk as a decorative statue. Either way, she’s a great addition to your Batman collection, even if her plans for those handcuffs aren’t GCPD-approved.

The SDCC 2016 Exclusive Batman Arkham Knight Harley Quinn Paperweight Statue will be available September 2016 but it can be pre-ordered now for $49.99 at Entertainment Earth. Limited to 2500 pieces. NOTE: This item will first be sold at San Diego Comic-Con 2016. If supplies remain after the show, your order will be filled.

Barbara Gordon’s video game alter-ego steps into the real world with the Batman Arkham Knight Batgirl Paperweight Statue. Based on her appearance in Batman: Arkham Knight, this approximately 7-inch-tall statue features Batgirl wearing an outfit that looks a bit more intimidating than her purple Burnside […]

Harleen Quinzel wasn’t exactly playing with a full deck to begin with but the Arkham Knight Harley Quinn Polystone Statue reveals the queen of chaos during a time when she showed how twisted she could really be. Standing 29-inches tall and dressed in her Arkham […]