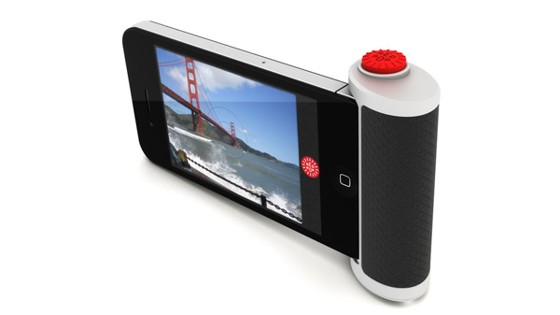 I love my iPhone, I really do. But when it comes to taking pictures with it, I find it’s not as easy as I’d like it to be. Because the smartphone doesn’t come with a separate button for just the camera, some of my shots just don’t turn out the way I want them to be. I end up with crooked photos, blurry shots, or worse, fail to take a picture with my subject in the shot. But the Red Pop iPhone Case is out to change that.

The story behind the case and its name is up on the Red Pop Kickstarter page, so you might want to check it out if you’re interested in giving a pledge to support the project.

It’s as simple as ‘Twist, Push, Pop’.
Just Twist the barrel, Push Red Pop on to your iPhone dock connector and start to Pop away taking pictures. Red Pop also allows you to shoot away like you would with a camera, with less downtime between shots.

We have been working on Red Pop for the last 12 months and are ready to push the button (see what we did there!?) on the first production run if we get backed on Kickstarter. We have a working prototype that has been developed within Apple’s MFI programme and we’re aiming to be delivering Red Pop into people’s hands at the beginning of September (sooner if we can).

The people behind the Red Pop case also have plans to develop a special Red Pop app for the iPhone to make sharing and uploading photos more of a breeze.

GeekAlerts introduced you to the world of Optrix iPhone Sport Cases about a year ago and now they have a new project that is looking for funding on Kickstarter. The Optrix Wide-Angle iPhone Sport Case features a 175 Degree Wide-Angle Lens with a military grade, […]

If you liked the Gizmon iCA Military Edition iPhone Case, you may want to check out a version that is more fit for civilians. This Gizmon Camera Style Case for iPhone has the same retro style, without the dark color. People won’t know whether you […]

Remember that big cell phone that brothers Steve and Doug were using in “Night at the Roxbury?” They were brothers? Noooo. Yeeees. Steroidal mobiles were the butt of jokes even back in the late 90s and now, they’re even funnier. Flash back to the 80s and don’t act like one of […]

With so many Apple device apps on the market and new ones being created every day, it only makes sense that you are going to want to keep your iPhone as close to possible at all times. The Quad Lock – iPhone Case Mounting System […]