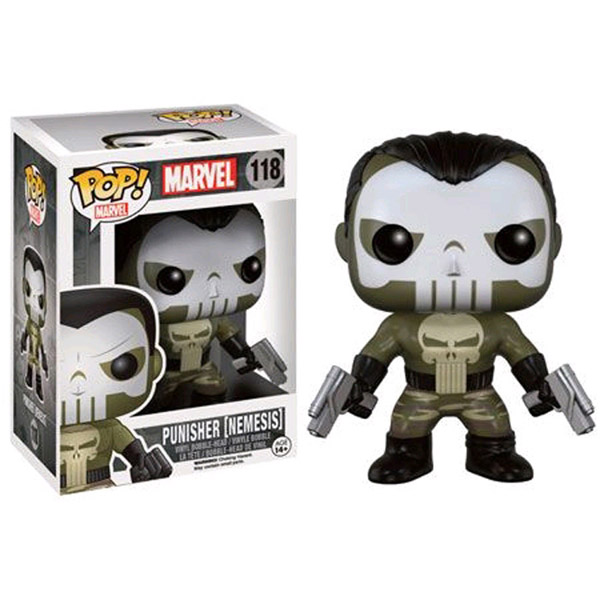 Frank? Is that you? The Punisher Nemesis Pop! Vinyl Figure is ready to dish out some hot lead and cold vengeance, but is this Frank Castle?

First, let’s cover what I’m not certain of. I don’t know if this is Frank Castle. Sure, the former soldier-turned-vigilante would probably have no problem wearing camo but he’s never been the shy type. On the other hand, Carlos Cruz became a Punisher-type vigilante and he wore a skull mask… but I don’t remember him wearing camo either. My brain has failed me.

Now here’s what I do know. Regardless of whether this is Cruz or a variant edition of Castle, this is an awesome, eye-catching figure. Standing about 3 3/4-inches tall and armed with two pistols and a knife in his boot, this is one bobble head you don’t want to mess with.

The Punisher Nemesis Pop! Vinyl Figure is available for $9.99 at Entertainment Earth.

You will not want to waste time when it comes to pulling the trigger on this Punisher Sixth-Scale Figure. Based on Jon Bernthal’s portrayal of Frank Castle in Season 2 of Netflix’s Daredevil, this gun-toting vengeance-seeker stands almost 12-inches tall and comes with accessories that […]

One vigilante takes aim at another on the Daredevil vs Punisher Square Off Men’s T-Shirt. Season 2 of Netflix’s Daredevil had the Devil of Hell’s Kitchen meet Frank Castle, the man who would become the Punisher, and now that epic confrontation is captured on this […]

This Punisher Logo Tank Dress is stretchy and comfortable. It is the perfect choice for any mission. It is also very adorable. It is a black tank dress that features little Punisher skull emblem polka dots all over. It’s vigilante chic. That skull print is […]