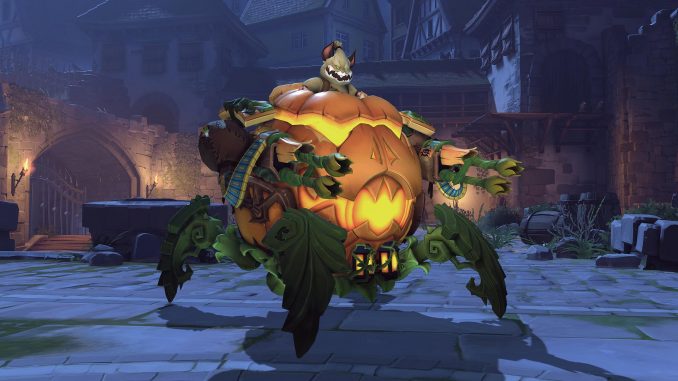 Celebrate the scariest time of year with Overwatch Halloween Terror 2018! It’s a seasonal event that starts today (October 9) and runs through October 31. It includes an updated Junkenstein’s Revenge action-packed PvE brawl where you and three other teammates take on a horde of Zomnics. There are also plenty of Halloween adjustments to maps with haunted versions of Hollywood, Château Guillard, and Eichenwalde. Use this opportunity to unlock tons of Halloween-themed items, including six new legendary skins: Jack-o’-lantern Wrecking Ball (pictured above), Banshee Moira, Bride Sombra,  Slasher: 76 Soldier, Swamp Monster Doomfist, and Enchanted Armor Pharah.

Watch the Overwatch Halloween Terror 2018 Trailer from Blizzard to learn more about it:

The Overwatch Halloween Terror 2018 event, IT’S A-LIVE! The haunt is on from now to October 31. Trick or Treat yo’ self with all new holiday-themed loot, and descend into the madness of our spoopy PvE brawl: Junkenstein’s Revenge!

Junkenstein’s Revenge — Team up with three other players and face off against a host of horrific enemies, including Junkenstein and his Monster; the mysterious Summoner; the Reaper; and the Witch of the Wilds. Now play as Brigitte and Tracer—this dynamic duo is ready and willing to face these fearsome foes!

Visit the Overwatch Halloween Terror page to learn more and to browse through the special frightening skins, highlight intros, and emotes you can get from the seasonal loot boxes. Just update your Overwatch to the latest patch (Version 1.29.0.1) and you are ready to go.

This patch also includes a number of updates, most important of which is a massive change to Torbjörn. Find out all the details in the Patch Notes.

The Friday Night Terror T-Shirt lets you relive those fond memories of your summers spent at Camp Crystal Lake. It’s a summer camp like no other, giving you many opportunities to work on your cardio with some late night jogs. If you were lucky, you […]