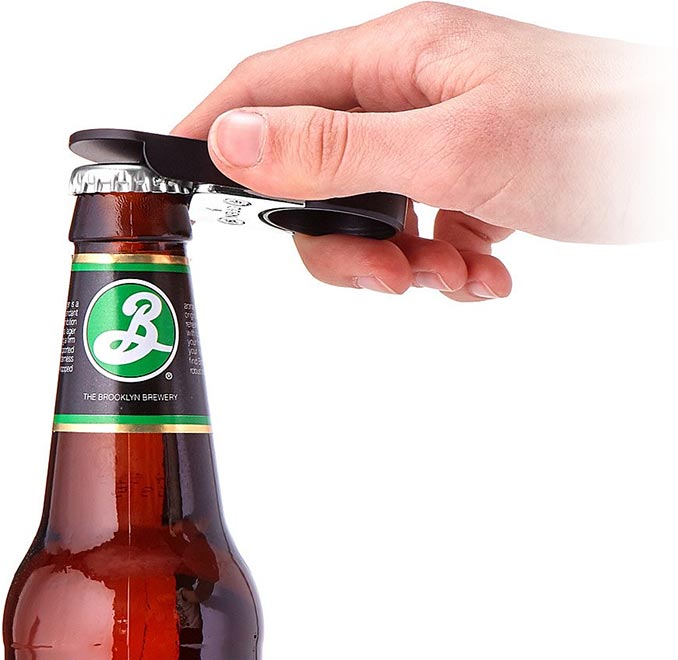 Any bottle opener can open a bottle (QED), but the Open – Close Bottle Capper has the nifty feature that it can also recap your bottle. Now you can reduce waste by recapping your unfinished beer or soda and putting it back in the fridge, without it going flat.

Most of us don’t have a problem finishing a whole bottle of beer or soda, although I know some people who are done after a couple of sips—content just to have a taste. Even if that isn’t you, this bottle recapper can be useful for things like craft beers, which often come in large bottles. These microbrews are also expensive, so you don’t want to waste. Instead of having to drink a full large bottle, this handy bottle opener and closer allows you have some beer from each of multiple different bottles and then recap them to seal in the carbonation so you can enjoy the rest later.

Do you like beer? We thought you might. Once you’ve popped that top, chances are you’re drinking the whole brew, too. But what if you’re in the park and it starts to rain? Or you want to finish the rest of that large format brew later? Your precious beverage will go flat. But our Open-Close Bottle Capper can open bottle tops AND recap them. Fizz lossage no more!

Buy the Open – Close Bottle Capper for $15 at Uncommon Goods.

Ever popped open a bottle of soda or beer and wished you could somehow pop the cap back on because you can’t finish the contents? Do you sometimes brew your own beer and wish that there was a better way of storing it so your […]

Last fall, GeekAlerts showed you the literally green Protect Our Earth Drinking Glasses made from bottles of bordeaux that were otherwise headed for the dumpster. Now that Earth Day is just around the bend, here is another eclectic set of Recycled Soda Bottle Drinking Glasses that will make […]