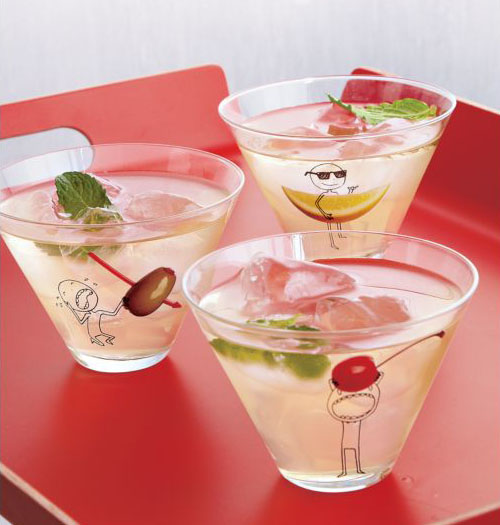 Martinis have evolved into drinks that are less hoity toity and more frou-frou fun, like pomegranatinis, chocolatinis, and even lycheetinis. Sometimes they taste so good that you don’t realize how potent they are; until the next morning when it’s too late. These Oliver Martini Glasses would be excellent on days when you just want to have a casual, doodlicious evening sipping some seriously good martinis.

The doodle dude’s name is Oliver, and he’s one big party animal. He’s earned a promotion since the days when he used to entertain you from your history notebook. One glass has him holding up a maraschino cherry as if he’s won a trophy. Another glass shows Oliver sporting shades and carrying an orange slice in surfboard-style. On the third glass, Oliver is having a teary meltdown. Maybe it’s because his precious olive got speared, or it could be because his glass is empty.

Just as you need to lose the necktie, these glasses need not bother with wearing a stem. Each Oliver Martini Glass is only $3.95 at CB2.

Geeks love getting festive and being seen with fancy drinks. Martinis in their traditional stemware are attractive, but one clumsy move and your 007 plan gets bamboozled, sending you straight towards loserville. Get major presentation points and avoid disasters sparked by skinny stemware with this Cubist Martini Glass Set that serves drinks […]

The Erlenmeyer Flask Martini Glass Set is designed after the lab tool: the Erlenmeyer Flask. Mix up a tasty experiment in your own lab. This set comes in colorful four pack for all of you mad scientists who like a good drink. It’s science! Erlenmeyer […]

Master Splinter didn’t want anything to do with these, but here they are: the Teenage Mutant Ninja Turtles Shot Glasses.