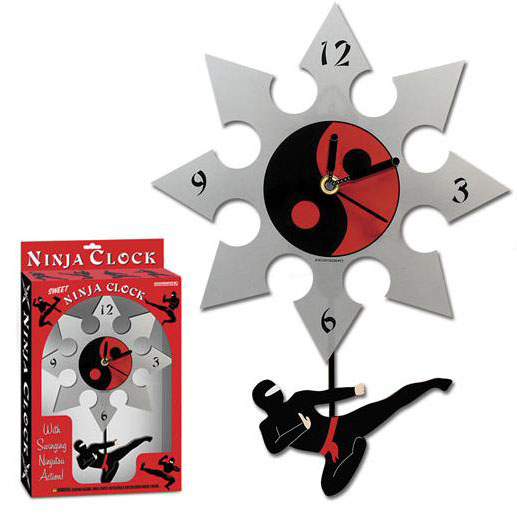 My nephew has always had such a huge fascination with ninjas ever since he saw some of the stealthy characters make an appearance in one his Saturday morning cartoon shows. In fact, he’s been clamoring for his mother to make (or get) him a ninja costume this Halloween. Since his birthday is coming up, I thought this Ninja Clock would make a pretty fine present for him.

The Ninja Clock really doesn’t skimp on the details. You’ll find that the frame is fashioned in the shape of a shuriken, with nunchuck minute and hour hands and a swinging ninja pendulum. Really, what more can you ask for?

Some pretty cool designs for clocks in general include the Timing Chain Clock, the 4th Dimension Concrete Clock, and the Doctor Who Dalek Wall Clock.

It’s pretty much common knowledge that ninjas control time. Just when you think you’ve got one in a bad spot, he’ll stop time and you’ll wake up three days later in the engine room of a Chinese cargo ship with double vision and a mysterious rash. This 13-inch tall, plastic time piece features nunchuck hands and a swinging ninja pendulum.

The Ninja Clock is available from Entertainment Earth for $19.99.

Getting tired of everything black and white and pixelated like the Pixel Time Wall Clock currently hanging on your wall?  Looking for something less minimalistic like the Poketo! Icon Clock?  Then keep your eyes open and your CPUs cracked open even wider.  Some people wear […]

In ninja school our master taught us to always be prepared, which is why we had to learn hot to kill a man with nothing more than a rice bowl. Kids these days have it so much easier, because someone invented Nunchops Nunchuck Chopsticks. With […]

An illuminating analog alternative to the Talking Dalek Alarm Clock that we covered a couple of months ago is now available for all the Doctor Who sci-fi fans out there.