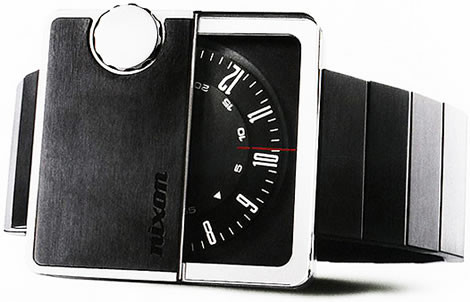 The California based Nixon company is celebrating their 10th anniversary this year and continues to release beautiful watches like the Talking Metal Dork and the Block SS. 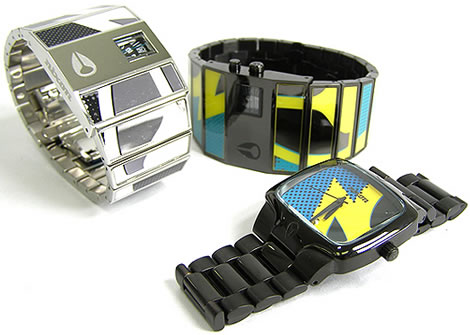 It’s good to see that it seems like this trend will continue next year as well. The models featured here have been announced by Zozotown as a series of new Nixon watches that will by available from February 2008.

The California based Nixon company are known for their stylish watches and makes sure to follow the same pattern with the release of their latest model.

As you probably can tell by some of our past posts (H1 Hydro-Mechanical Watch and Devon Tread 1 Watch), GeekAlerts really appreciates well-made timepieces and the Ventura SPARC MGS Digital Watches certainly qualify as that. Ventura wanted to create something new, so they used their […]

There’s something to be said about big and bold watches. They have lots of functions and make telling the time quite easy. The Nixon Unit Watch displays the temperature, dual time and has a timer, an alarm, countdown timer, and a backlight. The Nixon Unit […]

You modify or change your wardrobe everyday (at least most of us do), so why not change your watch? Your timepiece is a big statement to who you are and you should be able to change it depending on the situation. While at work you […]

The beautiful Metal Dork ($120) watch from Nixon features the basic time, day, date and alarm functions. In addition to reading the display, you can have it read out to you. Voices include Tony Hawk, Saxon Boucher and others. The watch has got a stainless […]

If you’re a geek you probably know how to read binary and can fully appreciate one of these Cadence 4-Bit Watches. Instead of the normal Arabic numerals or Roman numerals at each hour marker like regular watches have, these watches have the binary code instead. […]

Casio has updated their classic line of databank/calculator watches with some new cool colors and checkered patterns. You now have five different looks to choose from.

You are going to love this Nixon Super Unit SW Watch – Vader Black. It is a stylish watch perfect for any Imperial leaning humanoid. The moon phase indicator is a Death Star and it has Imperial logos embossed at 3 o’clock and 9 o’clock. […]

If Yoda needed to tell time he would probably wear one of these Limited Edition Seiko Star Wars Watches. Renowned watchmaker Seiko has just announced that they are releasing a new Star Wars collection of themed watches with a collective run of only 5,000 pieces, […]