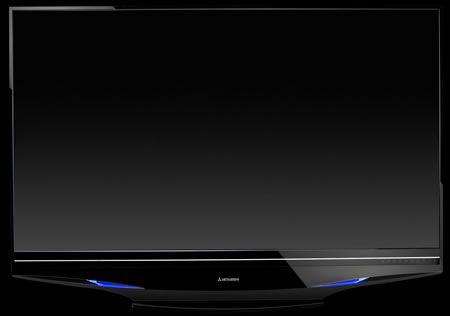 Today the Mitsubishi Digital Electronics America company has announced the name and details of their LaserTV (featured in the picture above).

Branded as LaserVue, the product line is the first-ever, laser-powered television that was introduced earlier this year at CES. The brand promises to deliver a range of color never before seen in home entertainment.

Additionally, Mitsubishi has released details surrounding the 2008 DLP line and the new ultra thin LCD line for 2008. Product highlights include a thinner frame and brighter picture on the DLP models and proprietary Ultra Thin Frame on the LCD HDTVs with improved sound capabilities.

The manufacturer’s suggested value pricing range from $1,799 to $4,699 for the DLP HDTVs, and from $2,499 to $4,499 for the ultra thin frame LCD HDTVs. Keep an eye on the Mitsubishi website for more information.

Convert a series of pictures into a comic strip, complete with voice bubbles, using the Comic Strip Photo Frame. We’ve posted about a lot of unique digital photo frames, but this is a traditional picture frame for regular pictures like the Polaroid Style Picture Frame, […]

Sceptre, based in California and manufacturers of affordable LED HDTVs, LCD HDTVs, and PC monitors, just announced the newest edition to their already stacked lineup of HDTVs. The E243BD-FHD “24” Series LED HDTV has plenty of features to go along with its sleek design. With […]

This flat design and the fold out stand on this stylish and travel-friendly speaker allows you the rest your audio player against it while watching movies or photos.

Remember the Illuminating Levitating Earth Globe? From the same German company comes this electromagnetic photo frame. Two electronic magnets, one in the foot and one at the top, controls the distance between the black/chrome arch and the frame. A standard magnet makes sure the […]

This 8-inch WiFi digital photo frame from eStarling has just been updated with a new cool feature. You can now link it to your Facebook account to view your and your friends uploaded pictures right on the digital frame.

With Black Friday and the rest of the holiday shopping specials about to get under way, AOC, the world’s largest manufacturer of LCD/LED Monitors and HDTVs, just announced the new AOC Ultra-Slim Aire Pro 23″ Monitor. This high definition monitor has an ultra-sleek design with […]