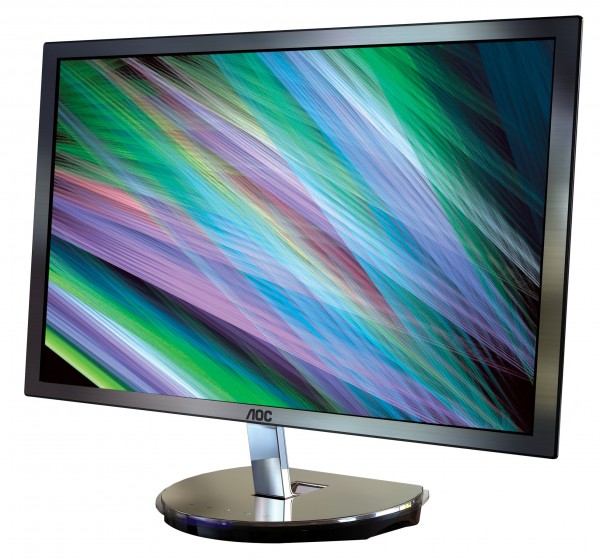 With Black Friday and the rest of the holiday shopping specials about to get under way, AOC, the world’s largest manufacturer of LCD/LED Monitors and HDTVs, just announced the new AOC Ultra-Slim Aire Pro 23″ Monitor. This high definition monitor has an ultra-sleek design with a brushed metallic finish. And if the looks aren’t enough to sell you, the cutting edge features will be. At only 9.2mm thin, this 23 inch LED display offers an IPS (In-Plane Switching) panel, dual HDMI ports, 5ms response time, 16:9 Aspect Ratio, 50,000,000:1 dynamic contrast ratio, mercury free LED backlight, an off timer, and a power saving mode to go along with numerous other top rated specifications.

Whether you are into gaming, Blu-ray movies, or just need a top of the line display for your daily workload, this new AOC Aire Pro has you covered at a fraction of the cost of leading competitors.

The Aire Pro has illuminated soft-touch controls on the front of its base and a user-friendly graphical OSD menu that make adjusting settings simple. The base also transforms into a built-in VESA stand that locks into place so that the monitor can be used on a desktop and easily mounted on a wall by simply pushing a button and folding the stand at its tilt hinge. No assembly is required for the stand. The monitor’s easily accessible connections are located at the back of the stand.

The Aire Pro monitor (i2353Ph) will be available at leading retailers like Tigerdirect.com for $199.99.

If you have an iPod or iPhone you’re going to want to take a look at the ultra-slim 23 inch e2343Fi LED Aire Monitor with Built-in iPod/iPhone Docking Station from AOC. Featuring built-in speakers with high quality SRS Premium Sound and a built-in universal docking […]

Are you looking for a slim LED HDTV for gaming, movies, and everyday work? AOC, the world’s largest manufacturer of LCD/LED monitors and HDTVs, just released the AOC 23-inch LED Flicker-Free 3D Monitor. Given the model number e2352Phz, this HD monitor will help bring all […]

Verbatim, the global leader in data storage technology and accessories, just announced the release of the Verbatim Ultra-Slim Bluetooth Wireless Mobile Keyboard. Available in black or white, this Bluetooth keyboard is .2 inches thin and 8.7″ long x 4.7 wide. Perfect for the person on […]

Sceptre, based in California and manufacturers of affordable LED HDTVs, LCD HDTVs, and PC monitors, just announced the newest edition to their already stacked lineup of HDTVs. The E243BD-FHD “24” Series LED HDTV has plenty of features to go along with its sleek design. With […]

Are you looking for a wireless keyboard cool enough to partner up with your high-tech computer system? If so, the Rapoo E9080 Wireless Ultra-Slim Keyboard with Touchpad has some great features and might be just what you need to finish off that “ultimate” system. This […]

This flat design and the fold out stand on this stylish and travel-friendly speaker allows you the rest your audio player against it while watching movies or photos.