We do not have any offers at this time. 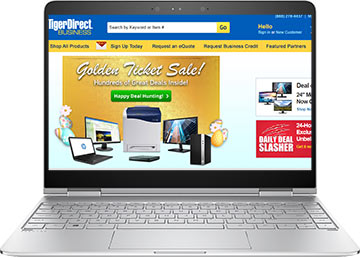 A favorite hacker saying is, “I would love to change the world, but they won’t give me the source code.”  Maybe we can’t get to the source of the world’s problems, but we can at least find a source of technological solutions at TigerDirect.com. This online store extends to its customers astonishing savings on computers, electronics, PC parts, and accessories, with even deeper discounts offered through overstock deals. They make ample use of rebates to ensure customers receive the best prices.

The company was originally founded as TigerSoftware in 1987, when it produced titles for both Apple Macintosh and Microsoft Windows. Once TigerSoftware began selling build-your-own PC kits and low-cost computers, however, it evolved into TigerDirect and launched its website in the late 1990’s. Later, the company began offering refurbished and recertified products and computers from popular manufacturers such as Gateway, eMachines, HP, and IBM. Today, Tiger Direct is bustling with products, having moved beyond computers to stock camcorders, cameras, CD and DVD burners, cell phones, digital picture frames, GPS navigation devices, home theater components, housewares, televisions (of the HDTV, LCD, and plasma varieties), MP3 players and accessories, projectors, and much more.  They maintain an inventory of reputable brands in technology, from Motorola, Samsung, Toshiba, Sony, Mitsubishi, and LG to Garmin, TomTom, Canon, JVC, and Kodak.

This online and catalog mega-store is also a haven for gamers, with its expansive stock of video games in every category for PCs, GameCube, PlayStation, PS2, PS3, PSP, Nintendo DS, Nintendo DSi, Nintendo DS Lite, Nintendo Wii, Xbox, and Xbox 360. You’ll also uncover outstanding deals on gaming accessories such as joysticks, gamepads, and controllers. If movies are more your line of entertainment, you can choose from thousands of titles on DVD and Blu-Ray DVD. If you need a way to organize all of your tech and entertainment gadgets, you can hop on over to the furniture section of their website for TV stands, CD and DVD racks, towers, and mounts.