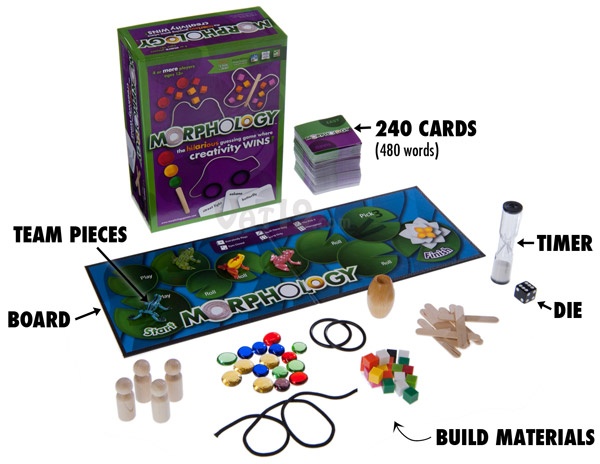 Get your creative juices flowing with the Morphology Board Game. I personally think it’s one of the coolest games to ever hit the (board) gaming scene, probably because I’m all for games that encourage players to think outside the box (or outside the board.)

The mechanics of the Morphology Board Game is more like a board game version of Pictionary. Instead of having players act out a certain object, they have to form it instead from the build materials included in the game. It’s a bit like the Morph It Dough Modeling Game, except without the dough and with a whole lot more fun. 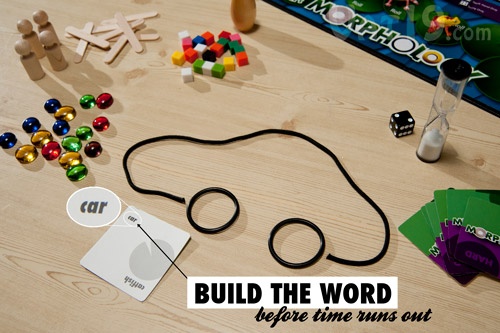 Morphology is the creative party game where you literally build clue words. Play begins when a team’s builder (aka Morphologist) draws a word card from the deck. He or she then has just 60 seconds to get their team to guess the word by constructing it using a collection of materials such as sticks, blocks, beads, string, and rings. It’s like sculptural Pictionary!

The builder mustn’t speak or act, but a certain level of nodding, grunting, and urging is strongly encouraged. Additionally, the Morphologist can manipulate the game pieces to communicate actions such as running, jumping, or swinging.

The Morphology Board Game is available from Vat19 for $29.99.

Move over Play-Doh, now there’s something yummier. Play-Doh is great and all. Sure it delivers hours of entertainment, is technically non-toxic and edible, but it’s not like we enjoy eating mouthfuls upon mouthfuls of its chewy, salty goodness. Yummy Dough, on the other hand, has all […]

It used to be that board games were just, well, that: board games. They came with a board, some game pieces, some cards or paper money, and the players were good to go. Now board games come with modelling clay like the Morph It Dough […]

Not up for real charades? If you and your friends or family are looking forward to a relaxing yet fun-filled night, then you might want to turn to the Morph It Dough Modelling Game, which is more or less like charades via molded figures. In the Morph […]

Funglish Game is a fun guessing game with a twist. It’s not like Pictionary, since no one’s going to be acting anything out. It’s not like the Morphology Board Game either, because no one’s forming any clues from the included set of props and build […]

Do you have what it takes to survive? The Worst Case Scenario Survival Game isn’t a game for pessimists, despite how its name sounds. In fact, it’s sort of an educational board game because it presents you with questions on how to deal with worst […]

The Angry Birds are not done with us yet. They have only just begun to become the most powerful merchandising force in this galaxy. And you will definitely want to get this Angry Birds Softee Dough Character Maker Set. It is sure to be a […]