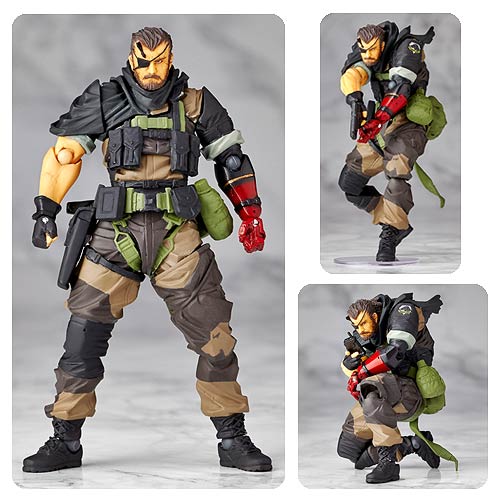 This Metal Gear Solid 5 Phantom Pain Venom Snake Action Figure is exactly what fans of the video game are looking for.

Based on the Metal Gear Solid 5 Phantom Pain video game, this Venom Snake Revoltech Action figure stands just under 6-inches tall. It has a surprising amount of detail that looks game accurate. The game follows the mercenary leader Venom Snake as he ventures into Africa and Afghanistan during the Soviet war to get revenge on the people who destroyed his forces during the events of Ground Zeroes.

This is a must for fans of the game. It is only $44.99 from Entertainment Earth.

Remember that cool Amphibious Robot Snake that was covered here at GeekAlerts back in June? It looks like that snake has a sister named Anna Konda, living on land and spending her days fighting fires. The robot is to our knowledge the biggest and strongest […]

Even better than the RC Tarantula, these Remote Control Snakes could be the catalyst for some great April Fool’s Day pranks. With light up eyes and realistic slithering motion, the Banana Boa snake or Green Mamba can frighten someone out of their skin. Plus it […]

Snake Eyes is one of the more popular characters in the G.I. Joe universe. His real identity has always been classified and so he is shrouded in mystery. Now you can be Snake Eyes with this awesome GI Joe Snake Eyes Costume Hoodie. That’s right, […]

For the discerning female who likes to spend hours playing Diablo 3 and dishing out the pain, I present the Diablo III Mistriss of Pain Socks. Great everyday wear, but perfect for slaying demons and leveling up. These socks sport a demon skull design and […]

The Ghost Who Walks is ready to take a break in your home with The Phantom Twelve-Inch Statue, featuring the comic strip hero that taught bad guys to fear purple. Before the alien from Krypton, before the vigilante in Gotham City, there was the Phantom, […]

Mankind has an ancient and likely justified fear of snakes. So what better way to get the attention of others, then with a Flexible Snake LED Light. Put it on your bike or on your backpack and its piercing red LED eyes will keep you […]

The Phantom Keystroker prank gadget is disguised as a harmless circuit board. Once connected to the USB port of your victim’s computer, it will start to randomly pull off some classic Trojan horse stunts.