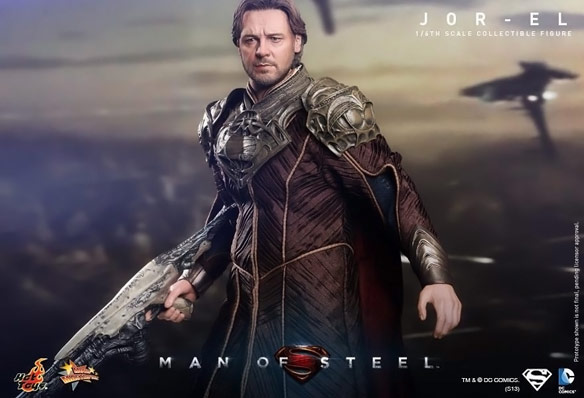 It makes sense that Superman’s biological father would be no slouch in the hero department because Kal-El had to get those genes from somewhere, but Man of Steel revealed that Jor-El was tough enough to hang around even after he died just to help guide his son. That’s macho to the extreme. The Man of Steel Jor-El Sixth Scale Figure finally gives the Super Dad the recognition he deserves.

This collectible figure is based on Man of Steel’s Jor-El as portrayed by Russell Crowe, featuring realistic facial expressions and a detailed hair sculpture, as well as movie-accurate clothing that includes a blue costume with embossed pattern, a brown robe with detailed tailoring, and armor that features the House of El emblem on the chestpiece.

You’ll be willing to destroy the Earth and rebuild Krypton just to add the Man of Steel General Zod Sixth-Scale Figure to your stash of Superman collectibles. Everyone knew Michael Shannon was going to have a tough job filling the iconic boots of Zod, who […]