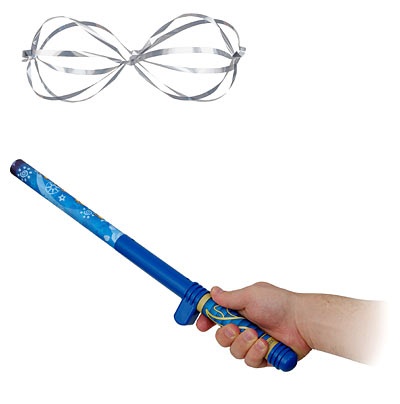 As adults, we eventually realize that magic is only a figment of imagination. But kids like to dream and to fuel their imagination (but make sure to still keep them grounded), you can award them with this Magic Levitation Wand. This blue wand will be able to turn that famous Harry Potter levitation charm into a reality.

This will only work with one of the five flying objects included in the set, though. But it’s still a pretty cool thing to be able to actually make things levitate, right?

If your kids still aren’t over the Harry Potter craze, then tell them to point this wand at the shaped metal objects while uttering the spell, “Wingardium leviosa.” Cool, right?

This battery powered wand features a mini Van de Graaff generator inside. Push a button on the handle and the static charge built up in the wand causes the included 3D mylar shapes to levitate at your command. You can also do some cool tricks causing the shapes to jump back and forth from your hand to the wand. Not quite Harry Potter… but hey, we do our best for you.

The is Magic Levitation Wand available from ThinkGeek for $19.99.

Now here’s more stuff that you (or your kids) can say “Wingardium leviosa” to and expect the objects to actually levitate. While the famous levitation charm from the Harry Potter series won’t work on normal objects, they certainly will if you use it in conjunction […]

Generators are great items to have when the lights go out… until you run out of gas. The GoalZero Yeti Solar Generator Kit removes the worry of running out of go-go juice because it gets its power from the sun. Two 30-watt monocrystalline solar panels, […]

How do wizards and Fairy Princess’ season their meals? With Salt & Pepper Magic Wand Shakers of course. They make meal time magical and allow you to cast a salty or peppery spell on your food. This pair of salt and pepper shakers are made […]