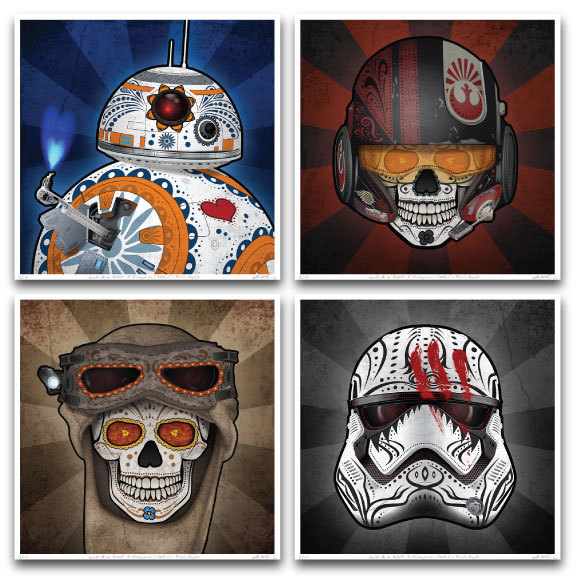 Artist Captain Magnificent AKA John Karpinsky has created an awesome collection of prints capturing the four new heroes of the Star Wars universe. Karpinsky has even given each print a cool name.

Each print measures 12″ x 12″ and is limited to just 100 pieces. Each illustration will come numbered and signed, with a certificate of authenticity.

The Force will be with you when you display the Star Wars The Force Awakens Chibi Prints 4-Pack around your home, entertaining Jedi, Sith, and Knights of Ren with your excellent artistic taste. Artist Derek Laufman, the same guy behind the animated-style Force Awakens print, […]

Awaken the Force of your inner child with the Star Wars: The Force Awakens ’25 Cent Wonders’ Art Prints. They’re basically lost to the past now but there was a time when parents could entertain their children while shopping by popping a quarter into a […]

If the adventures of Rey, Poe, Finn, and Kylo Ren happened in 18th century England instead of a galaxy far, far away, the characters might look like the Star Wars: The Force Awakens Regency Art Prints. The artist known as TheRealMcGee takes us to an […]

Star Wars fans will want to get their hands on these Dark Ink Limited Time Release Star Wars Prints soon because they’ll be disappearing as fast as Ben Kenobi when Vader swings his lightsaber at him. Wondering what ‘limited time release’ means? It means you […]