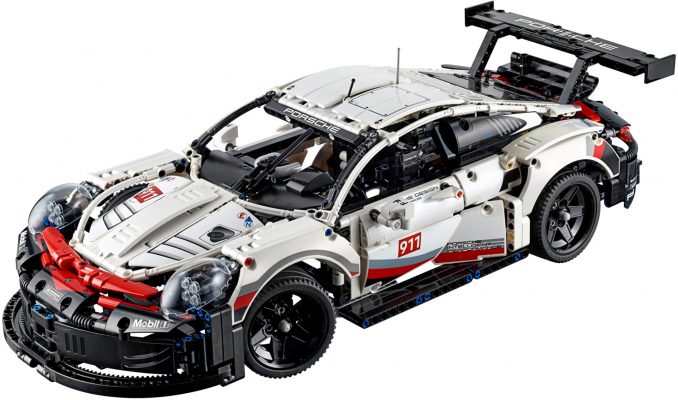 Build a highly authentic race car replica with the LEGO Technic Porsche 911 RSR #42096. This collectible set features realistic movement and mechanisms that introduces builders to the universe of engineering while they’re having fun building the set.

Featuring 1,580 pieces, this building set allows you to recreate the Porsche 911 RSR in stunning detail, matching the real vehicle’s powerful appearance and aerodynamic contours. It has the ‘swan neck’ mounts, large rear wing, extended rear diffuser, black spoked rims, and realistic head and tail lights to match the actual race car. Plus it comes with a sticker sheet to match the decals and authentic white, red and black color scheme.

Open the doors to reveal a detailed interior that features working steering, a radar screen, and a fire extinguisher system. There even a track map of the Laguna Seca circuit printed onto the driver’s door. Other impressive features include an independent suspension, working differential, and a six-cylinder boxer engine with moving pistons positioned in front of the rear axle.

Celebrate an icon of engineering excellence with the LEGO® Technic™ 42096 Porsche 911 RSR. Developed in partnership with Porsche, this authentic replica captures the vehicle’s powerful appearance with its sharp contours and aerodynamic detailing, including a rear wing with ‘swan neck’ mounts, extended rear diffuser and specially designed side mirrors.

Functions include a visible, working differential, independent suspension and a six-cylinder boxer engine with moving pistons positioned in front of the rear axle, while the accessible cockpit features a radar screen, working steering, fire extinguisher system and even a track map of the Laguna Seca circuit printed onto the driver’s door. Black spoked rims, realistic head and tail lights and an authentic white, red and black color scheme with sticker detailing add the final touches to this awesome LEGO Technic Porsche 911 RSR model, a perfect display piece for the home or office!

This LEGO Technic Porsche 911 RSR is now available at Lego Shop, where it costs $149.99. It’s a great way to get a car that you could never own for real, and it would go great with the LEGO Technic Bugatti Chiron and LEGO James Bond Aston Martin DB5.

This beautiful radio-controlled car is a highly detailed 1:18 scale replica of the coupe model from the classic Porsche 356 series, which was the first production line of cars from the well-known German automotive manufacturer.

Ever notice how some Thai restos don’t give you nearly enough water to put out the fires that burn in your mouth after eating hell-hot chili peppers? Somebody call 911. Shawty fire burning on the taste buds, whoa! Most of the time, there aren’t nearly enough tissues to […]

If you are a fan of Porsche, slow down from your life in the fast lane for just a little bit and enjoy a nice cold drink with some Porsche ice cubes in it, thanks to this Porsche Ice Cube Tray. This awesome tray will […]

If you think the High-Tech Sledge is a little over your budget, you might want to consider this Porsche Design winter toy as an eye-catching alternative.

If you still use a mouse and want to add some bling to your desktop, try this Gold Porsche Computer Mouse. It’s a luxury mouse for those with luxury tastes. It’s shiny and is the same design as the Porsche 911, complete with a printed […]

Curious to to know what’s hidden inside the accessories case of the Cayman S Porsche Design Edition 1 limited-edition special series?