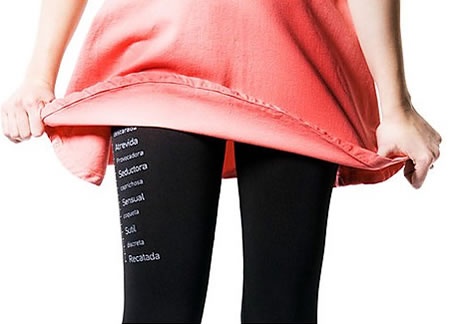 What a lot of parents have to deal with when they’ve got some teenagers, specifically of the female gender, is with wardrobe choices. Nothing puts a dad more on guard then a daughter going out in ridiculously short skirts or skimpy dresses. If you’re one of those dads who just can’t seem to tell your daughter straight about how you’d like her to cover up more, then say it with these Leggings with Chastity Yardstick.

It’s an amusing article of clothing that also delivers a pretty strong message at the same time. Not only that, but she can actually wear it out, too, topped with a tunic or long top that can cover up just enough leg area to expose the right “measurement” on the chastity yardstick.

It’s not exactly on top of every fashion plate’s list, but hey, at least it will deliver your message loud and clear. 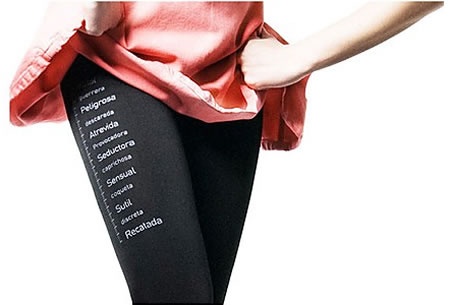 Sometimes you wear skirts that are so short you know you’d fit right in on the set of “Pretty Woman” And other times you’ll wear skirts way bellow the knee that look more like something out of “Little Women”.

But, the truth is, it’s all the same to you. And that’s just the right attitude. Put these leggings on and let the world know whether you’re playing coy or feeling more coquettish…
These leggings have a built-in chastity yardstick that measures forty inches of exposed thigh and is marked with the following adjectives (in Spanish): fatal, warrior, provocative, seductress, coquettish..

The Leggings with Chastity Yardstick is available from Curiosite for $22.88.

These Geek Motif Ladies Knee Socks will look super cute on any geek girl. These cotton blend knee socks come in several styles for geek girls who want to fly their geek flag at ankle length. These socks will fit women’s shoe sizes 5-10. If […]

Give your legs a superhero look with the Wonder Woman Leggings, because DC Comics characters aren’t the only ones who get to change their look. Wonder Woman has gone through a few wardrobe changes over the years but red and blue are always her main […]

GeekAlerts has shown you cool Doctor Who Over the Knee, Knee-High and Crew Cut Socks in the past, but these Doctor Who TARDIS Knee-High Socks are even better looking. Officially licensed, these black knee-high socks feature an allover blue TARDIS print that will have fans […]

Baby’s got to crawl, but you can make it less painful and a whole lot more comfortable for them with these Crawlings Knee Pads. I’m sure you’ve done some crawling as an adult and know how uncomfortable it is, especially if your knees happen to […]

Finally, a pair of leggings everyone can enjoy. The Junkfood Yellow Leggings are made from a 83% polyester bright & 17% spandex blend, giving them a comfortable and snug fit. If you look closely, you’ll notice that these leggings feature some tasty treats in 8-bit […]