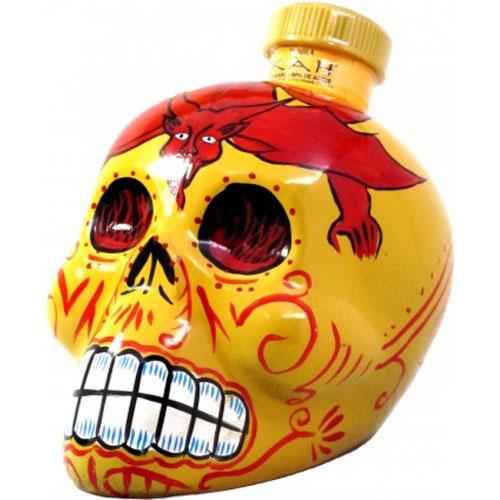 I’ll be honest, when I first saw the KAH Tequila Reposado bottle I wasn’t sure if it was something you drank or something you used to ward off evil spirits. As it turns out, it’s probably good for both….Kidding aside, this looks like the perfect tequila for any Cinco de Mayo party, Day of the Dead celebration, or even a Halloween party.

KAH Tequila makes three different varieties, each with their own custom bottle. The 2010 bronze medal winning Reposado is a 110 proof tequila that is aged for 10 months in French limousine casks, resulting in a flavor that has subtle hints of caramel and vanilla.

KAH Reposado Bottle
El Diablo – The use of devil imagery was inspired by Day of the Dead celebrations in Peru. The festival takes place the week before November 5th on the banks of Lake Titicaca. The traditional dances (complete with red dangling crucifixes) are rumored to be led by the devil himself. Traditional dances are dedicated to Satan. This region of Peru is mostly a mining area and workers spend much time underground. According to ancient Incan beliefs, Satan lives underground making the mine workers very vulnerable to his powers due to their daily proximity. The festival is designed to honor Satan, thus keeping the workers safe. They even pour tequila on the ground for the devil to drink.

You can learn more about the KAH Tequila Reposado, KAH Tequila Añejo and KAH Tequila Blanco from KAH Tequlia. You can purchase all three at Pacific Online Spirits from $44.95 and at BevMo from $42.99.

When it comes to tissue holders, trust only the Egyptian Priestess A Kah Kah Loo Bath Tissue Holder. Yes, it has a funny name. It will hold the toilet paper in your own private Temple of Fumes. You don’t have to excavate a pyramid in […]

Are you looking for something unique to add some fun and excitement to your next party or get together? Try the Himalayan Salt Tequila Shot Glasses. They are the perfect shot glasses for any tequila drinking party, especially on Cinco de Mayo. Designed to look […]

You never know when you might get stranded on some island or swept off at sea, right? To at least arm yourself with the basics if such kind of disaster strikes, then simple get one of these Waterproof Festival Survival Kits.

Since you only have a few months left until the infamous month of December 2012, you might as well start practicing your dead party skills with the Dead Dinner Guest Disguises. These masquerade masks are made out of paper and come with several props to […]

You are going to look great with these Star Wars Yoda Dangling Lightsaber Earrings dangling from your ears. These rebel logo stud earrings have backs that feature a dangling lightsaber charm. That means you get two different looks from a single pair of earrings. A […]

These Star Wars Darth Vader Dangling Lightsaber Earrings are a great gift for the Sith lady in your life. You get Imperial Crest stud earrings with backs that feature a dangling lightsaber charm and rubber stoppers. So you get two different looks from a single […]