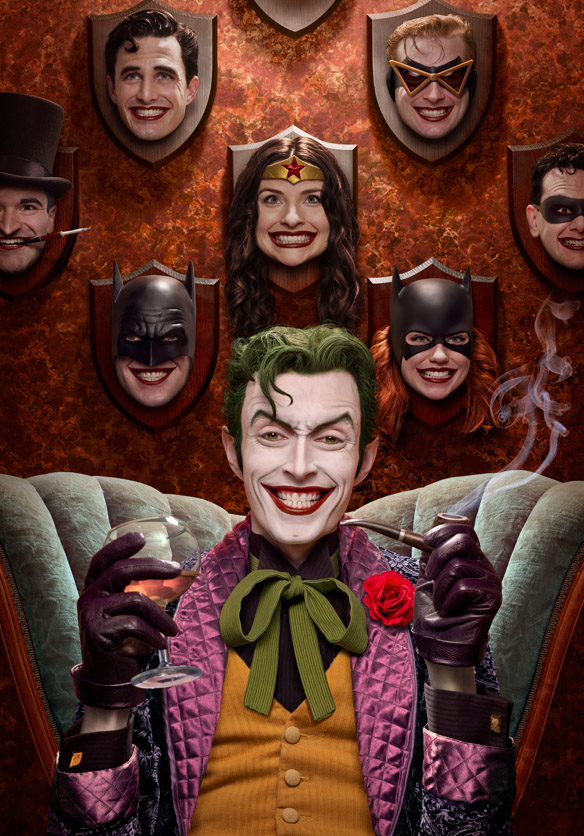 The Joker has been doing some hunting lately, and the Joker Trophy Wall Autographed Poster shows that hunting season has been very good to him.

There are a lot of great cosplayers out there but Anthony Misiano seems to have been born to play Batman’s arch-nemesis, to the point where I wouldn’t be surprised to hear the Clown Prince of Crime’s maniacal laugh come from his mouth.

Based on ‘Joker’s Trophy Wall,” a 2005 illustration by Brian Bolland, this 11 x 17 print features Misiano as the Joker sitting in front of a wall of trophies that include Wonder Woman, Superman, Batman, and Batgirl. Even the Penguin apparently ended up on the laughing one’s bad side.

Forget about real animals because the Battle Cat Hunting Trophy lets you claim the mightiest beast of Eternia as your very own piece of wall art. Fictional trophies are the best kind of trophies and this one is sure to get plenty of attention. Crafted […]

The man behind the pins has added a little extra something to this Autographed Pinhead Pop! Vinyl Figure, and it’s not a one-way ticket to the underworld, so relax… and enjoy the sights he has to show you. Standing 3 3/4-inches tall, the leader of […]

It’s a problem. You really want to be like your buddies and have a deer head in your living room, but the idea of killing Bambi makes you faint. The Cardboard Safari Animal Trophies lets you have the best of both worlds, and you don’t […]

Anyone can hunt down a deer, moose, or even a bear, but what about a Cthulhu? Hang this Mounted Cthulhu Plush Wall Trophy up in your game room and anyone that steps foot in there will know you mean business. Sure, it’s not the real […]

Sometimes it is nice to have a really easy costume for Halloween. Something easy to put on, easy to take off, that doesn’t restrict your movement, and allows you to eat and drink easily. The problem with most of these is that they are too […]