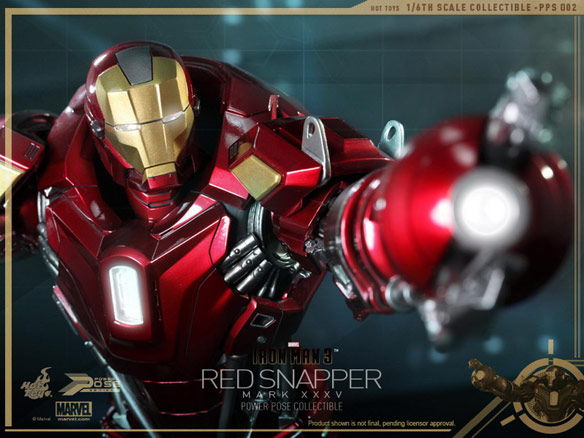 Iron Man 3 has Tony Stark rolling out more armor than you could shake a stick at and the Iron Man Mark XXXV Red Snapper Figure shows off one of the more interesting designs that have been dreamed up, even though the genius/billionaire/playboy/philanthropist was obviously tired when he came up with that name. Red Snapper? Sounds like something you need antibiotics for.

Even with the questionable name, the Mark XXXV is an awesome piece of equipment, designed as a disaster rescue suit to help people during emergencies, which shows that Tony isn’t nearly as selfish as he used to be.

The 13-inch-tall figure is part of the Power Pose series, features over 15 points of articulation, and includes all the cool features that make this armor unique from the others, such as the extendable arms and claw-like hands. The armor is also compatible with the Movie Masterpiece Series of figures so you can mix-and-match to create different designs.

The Iron Man Mark XXXV Red Snapper Figure will be available December 2013 but can be pre-ordered now for $254.99 at Sideshow Collectibles.