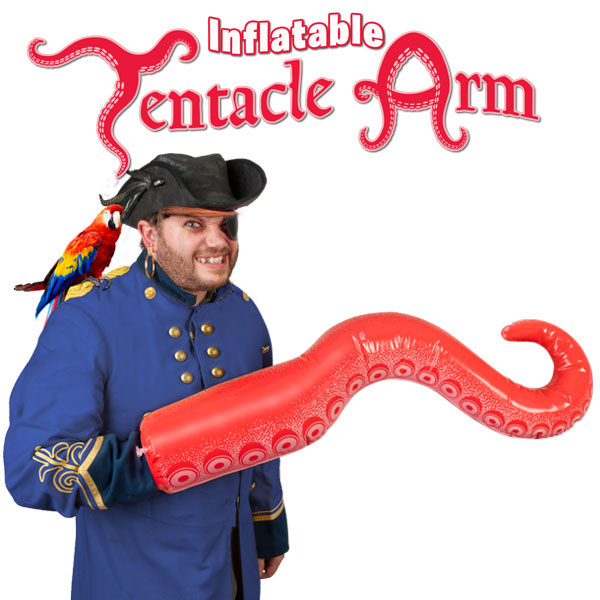 Blasted barnacles! What’s this humongous thing where my arm used to be? I might be more than just a little inspired with all this pirate talk having just watched The Adventures of Tin Tin last night at the cinema. But really, you don’t have to dress like a pirate in order to find some use for this huge Tentacle Inflatable Arm.

Goof around, use it as part of some costume, hit someone on the head with it–just go crazy with the Inflatable Tentacle Arm. And do you know what would go great with it? None other than the Tentacle Mustache. 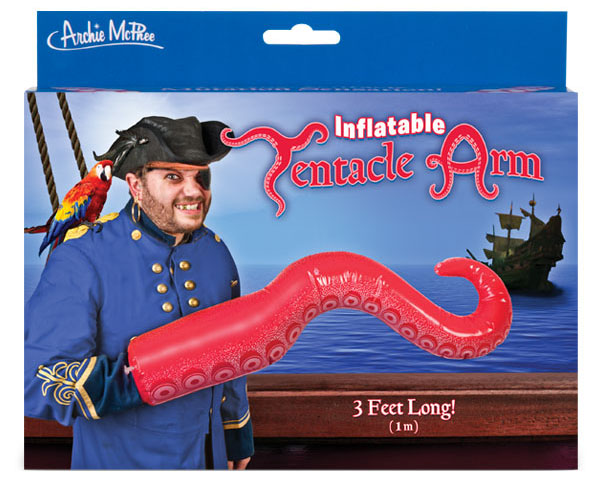 Your plain old human arms are so humdrum and commonplace. Why not replace one of them with a tentacle? This 3′ (91 cm) x 7″ (17.8 cm) diameter vinyl Inflatable Tentacle fits snugly over your hand and lets you pretend you’re slowly turning into a squid. Adds a bit of zing to any boring, traditional costume. Instead of dressing like a hobo, you’re a tentacle hobo!

The Tentacle Inflatable Arm is available from McPhee for $12 and at Amazon.com for $14.95.

Not only is the Inflatable Cthulhu Arm one of the greatest “I completely forgot about Halloween and am just going to wear this tentacle” costumes, it’s also great for all of those man caves where you have great times with the fellow geeks.  Poker?  Watching […]

The Scalp Squid Head Massager gives a scalp exactly what it needs: a couple of good squeezes from the trained tentacles of a squid. When you’ve been working hard, and the skin on your head scrunches up like the nose of a pug, it’s time […]

A lot of those stick-on mustaches look good from far away, but it’s pretty clear that they aren’t real when you get up close and personal. And if they’re just too out there to look real (like the Hipster Mustache and Jumbo Novelty Mustache), then […]

Handcrafted and designed by Odd Art Fabrications, the Tentacle Doorstop is sure to put a smile on the face of any sci-fi fan. Stick it under your office door and watch as the Cthulhu fans and Jules Verne fans flock to your area to see […]

Do you have limited shower space? Then, it’s probably best to clear the shower floor of random bath products and hang them up on this smart Shower Squid. This squishy fellow has several tentacles at your disposal to hang shampoo, conditioner, body wash, and bubble bath […]

You can never have enough firepower. However, miniguns are heavy. Lugging those things around will break your back. Carry this Inflatable Minigun Arm instead. What you lose in firepower, it makes up for in lack of weight. This is perfect for Halloween or any dress […]