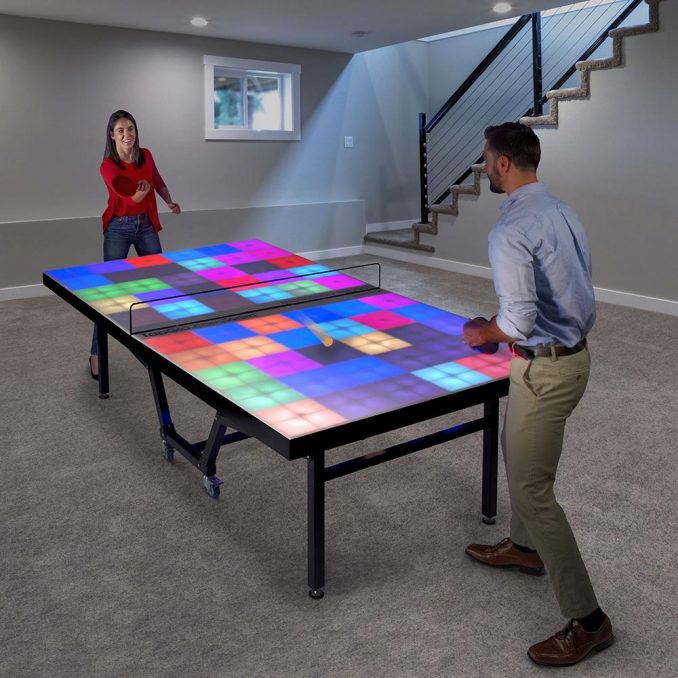 Why have an ordinary table tennis set, when you can take things to the next level with this Illuminated Ping Pong Table? It doesn’t just look cool, this illuminated table tennis game provides extra challenge and excitement by turning off sections of the table that have been hit. Your goal—to turn your opponent’s entire table dark before they do it to you.

That’s not all, as there are other fun game modes, like a light chasing challenge, as well as varying levels of difficulty.

This is the illuminated table tennis game that challenges players to target colored squares on their opponent’s side, turning the table dark section by section. Unlike the traditional table sport, the winner is not determined by the team that scores the most points, but by the team that has turned off all the other side’s lighted squares. It has multiple game modes with varying levels of difficulty including a 60-square game board, a 24-square game board, and a light chasing challenge. Includes four paddles and six balls.

Purchase The De-Illuminating Table Tennis Game from Hammacher Schlemmer for $7,000. Not exactly a bargain, so convince a friend to buy it and play over there!

There’s Air Hockey, and then there’s Air Table Tennis. The latter game is pretty hard to imagine, due to the very nature of the sport itself. But really, all you need is the cool Air Table Tennis paddle and you’re good to go. You won’t […]

There’s always that awkward moment at a gathering where some people want to play a game, while others just want to sit and watch or continue catching up. One of the easiest games to start up during such occasions is table tennis, and this time, […]

I’m not much of a tennis player, but I do love catching the games on television. I get some rounds down at the courts in the country club too, when my friends invite me to play. One of my biggest peeves is getting the ball […]

This Star Trek U.S.S. Enterprise NCC-1701 Ping Pong Table is styled after the iconic ship from the original series. If you work at one of those cool technology companies that provide games like foosball and table tennis for employees to use, you need to suggest […]

Remember that U.S.S. Enterprise Ping Pong Table? It was awesome, but expensive. If you can’t justify the cost of the table, you can get these Star Trek U.S.S. Enterprise NCC-1701 Ping Pong Paddles to give your table tennis some Trekkie spirit. (If you do have […]

This colorful table will add a fresh and playful touch to your living room or office with its yo-yo inspired design and a wide range of beautiful colors.