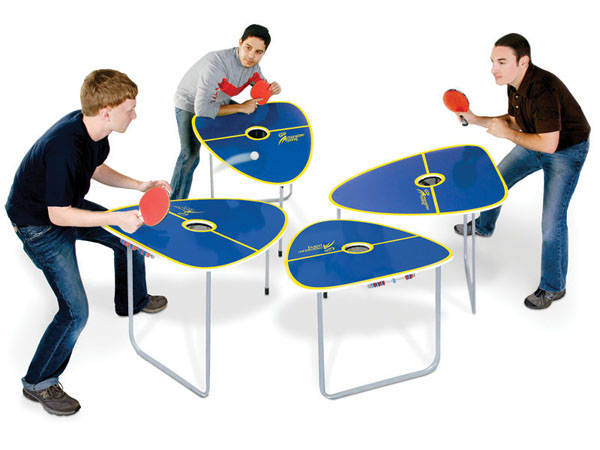 There’s always that awkward moment at a gathering where some people want to play a game, while others just want to sit and watch or continue catching up. One of the easiest games to start up during such occasions is table tennis, and this time, you won’t be limited to just two players. Instead, up to four can play, and not in the usual doubles version of ping pong–that is, if you’ve got the Quad Table Tennis Game.

So basically, each player gets a separate table in the Quad Table Tennis Game. It’s completely unlike the usual setup for table tennis where there’s just one table and a net, and that’s it. Four players basically huddle behind their own guitar-pick shaped table, each with a hole in the middle, and try to put the ball in the opponents hole.

This is the tennis table game with four separate tables that pits up to four players against one another for unpredictable, exciting play indoors or outdoors. Placed just a few feet apart facing one another, each triangular-shaped, 24″ long x 18″ wide table tapers to a round point in the front; the back edge is pitched 10º, causing balls to bounce up towards a player.

Each table has a line for initial serves; a player hitting a ball into the center hole of an opponent’s table scores a point. Sturdy fiberboard and powder-coated steel construction; table legs fold for storage. Includes four tables, four foam-padded wooden paddles, and four balls.

The Quad Table Tennis Game is available from Hammacher Schlemmer for $249.95.

With so many Apple device apps on the market and new ones being created every day, it only makes sense that you are going to want to keep your iPhone as close to possible at all times. The Quad Lock – iPhone Case Mounting System […]

There’s Air Hockey, and then there’s Air Table Tennis. The latter game is pretty hard to imagine, due to the very nature of the sport itself. But really, all you need is the cool Air Table Tennis paddle and you’re good to go. You won’t […]

I’m not much of a tennis player, but I do love catching the games on television. I get some rounds down at the courts in the country club too, when my friends invite me to play. One of my biggest peeves is getting the ball […]

So you can’t decide between buying the foosball table or the pool table, but there’s definitely not room for both. Or is there? The 4-in-1 Rotational Game Table takes up less space than full-sized game tables and offers four great games that can be played at one spot. […]

These Table Tennis Notebooks make sure that you can always play a game. You get 2 notebooks with built-in paddles + 1 net notebook. All you need is the table and the balls. If you love table tennis, take notes with these notebooks between plays. […]

This is the first pool table in the world to have both horizontal and vertical game play, allowing balls to be able to be hit up or down the corner “scoops” to the different levels. The game is similar to pool in that a player […]